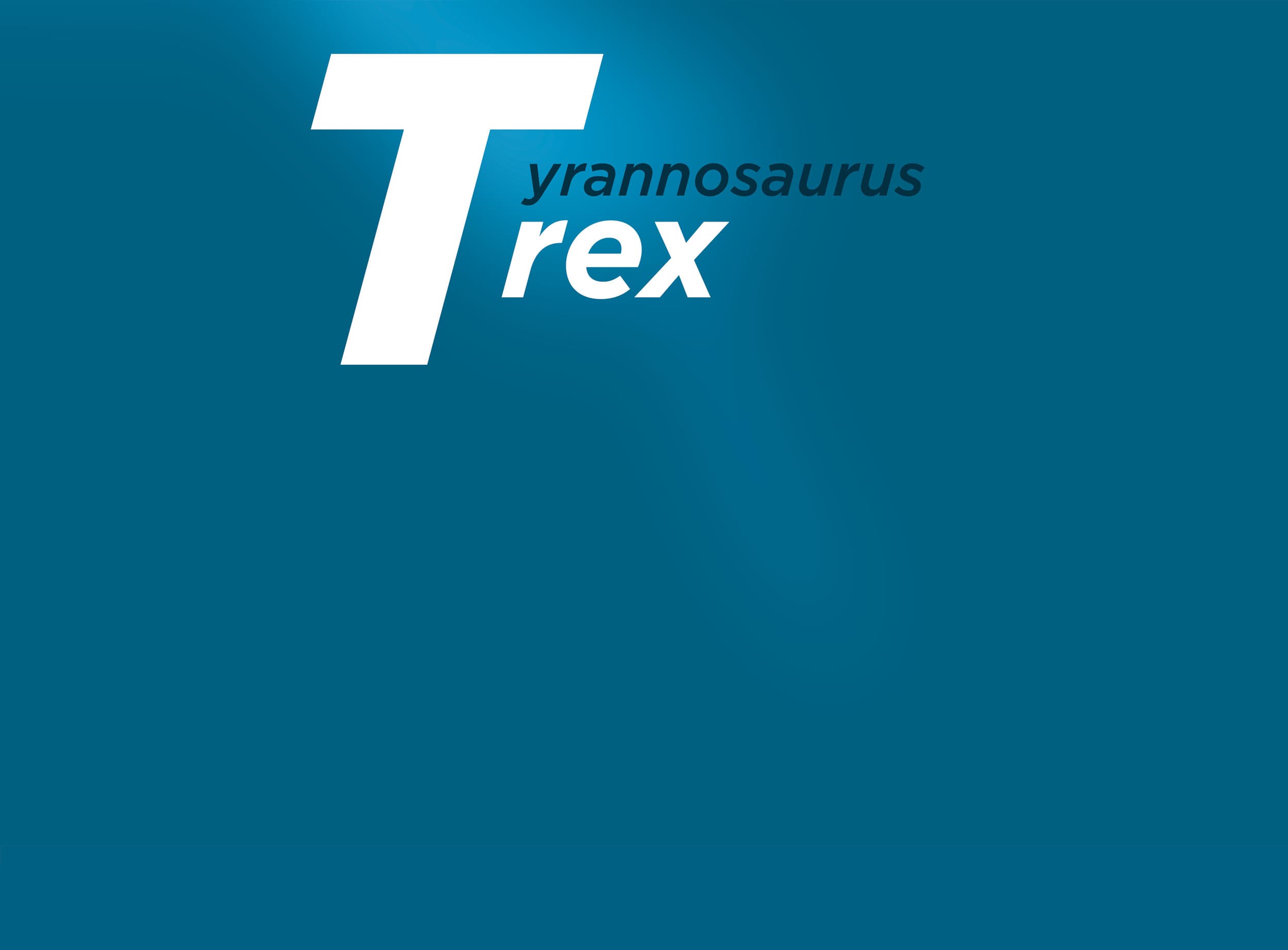 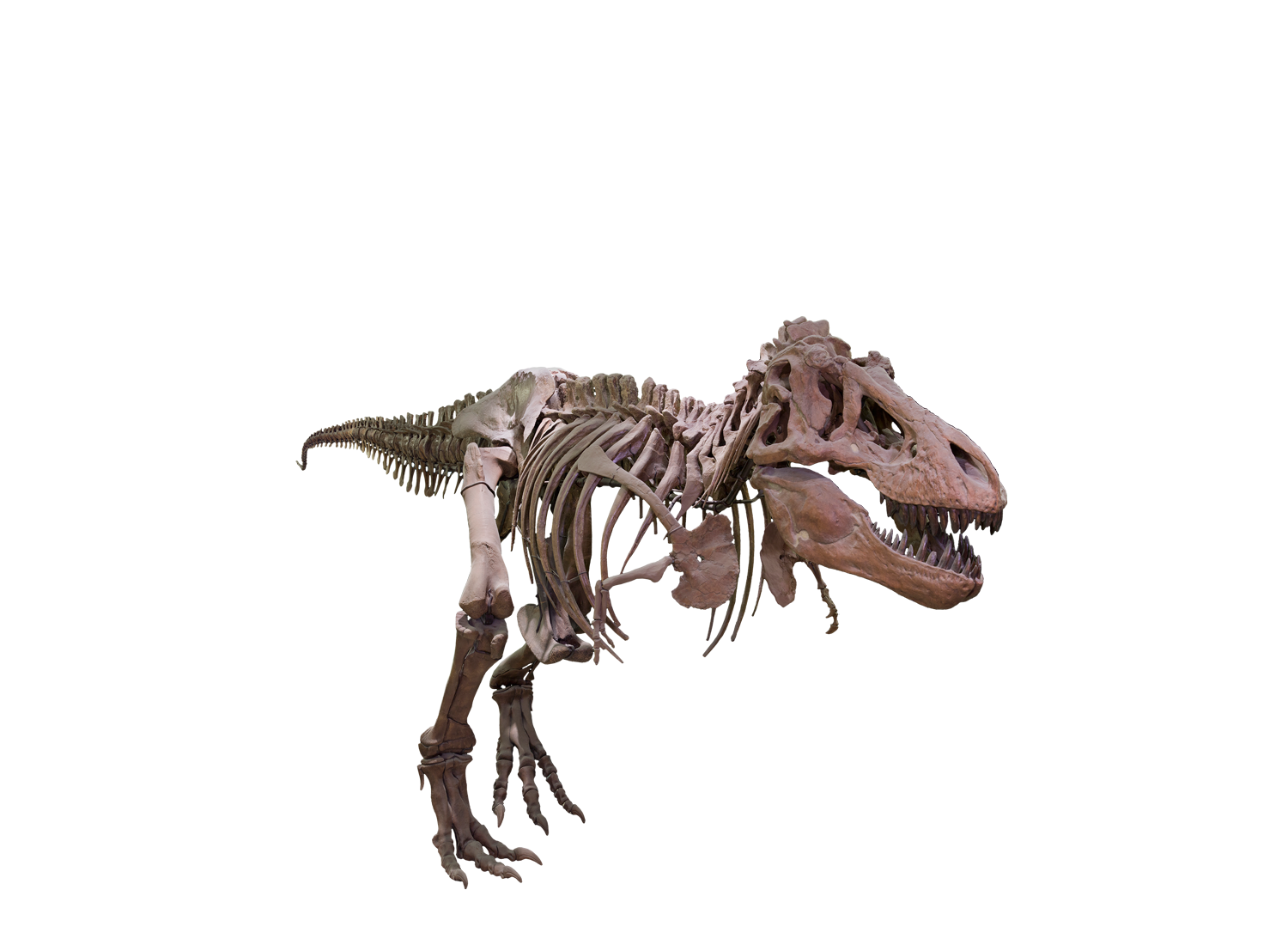 Tyrannosaurus rex was one of the largest and most fearsome carnivores of all time. Although  Tyrannosaurus rex  is one of the most renowned dinosaurs,  few of the fossil specimens recovered by paleontologists are complete.  The first  T. rex fossil was discovered by a curator from the American Museum of Natural History—the legendary Barnum Brown—and the Museum boasts one of the few specimens of  T. rex on public display.

Besides fossilized stomach contents, teeth are our best clues to the diets of dinosaurs. The teeth of carnivorous animals are usually sharp, serrated dagger-like blades. These teeth help the animal both to kill the prey and to slice the meat before swallowing.  T. rex didn’t chop or grind its food; it swallowed chunks whole. In addition to its sharp, serrated teeth, the lower jaw of  T. rex had a joint midway through its length that may have helped absorb some of the shock generated by struggling prey.

Where did T. rex live?

T.rex lived at the very end of the Late Cretaceous, which was about 90 to 66 million years ago.

How do we know? One way of dating fossils relies on their relative positions in the ground. When paleontologists dig deeper in sedimentary rock they are, in effect, looking back in time. As sediments carried by wind and water accumulate, they bury older layers—so the bottom layers in a geological sequence are usually the oldest and the top layers the youngest. To date rocks and fossils precisely, scientists can measure the amounts of particular radioactive elements—often radiocarbon or potassium—present to determine when a rock was formed, or when the animal died.

How long could  T. rex live?

Probably not more than about 28 years.

Sometimes animal bones, like the trunks of trees, accumulate yearly growth rings. The number of rings tells scientists the age of a specimen; the width reveals whether the animal was still growing. But only certain bones preserve a complete set of growth rings; unfortunately, the large limb bones that survive best as fossils are not among them.

Growth rings indicate the  T. rex grew quickly, reaching adult size as a teenager—and that the animals died young. The oldest specimen analyzed was only 28 years old. The image below shows a thin section of a  T. rex rib with annual growth lines 12 through 19.

Learn about how scientists study growth rings in bone.

Based on fossil specimens, scientists have determined that a Tyrannosaurus rex could be up to 40 feet long and 12 feet high.

Scientists continue to disagree about its speed —fast or slow?

Estimates of dinosaurs' speeds are usually based on fossil trackways, like the one shown here. The most reasonable interpretations, based on the best-preserved trackways, indicate a walking speed of 3 to 6 miles per hour. Running speeds are often based on the study of biomechanics. Researchers study the muscles and body design of large living animals—and the stress on the body caused by running. Applying this research to extinct animals, they think that  T. rex was a slow runner, achieving perhaps only about 10 miles (16 kilometers) per hour—about as fast as an average human runner. These experts say size slowed  T. rex down. But why is it so hard to be big and fast? Bones, muscles, and posture all play a part.

Learn more about the size and speed of  T. rex.

When was  T. rex discovered?

In 1902, Barnum Brown, then an assistant curator for the Department of Vertebrate Paleontology at the American Museum of Natural History, recovered a partial skeleton of  T.rex at the Hell Creek Formation in Montana that would become the holotype specimen—the single specimen designated as the name-bearing representative of a new species.

Over the next few years, he and his team would go on to find several more specimens on expeditions out West. Henry Fairfield Osborn, then the president of the Museum, gave the dinosaur its name in 1905:  Tyrannosaurus rex, “the tyrant lizard king.” 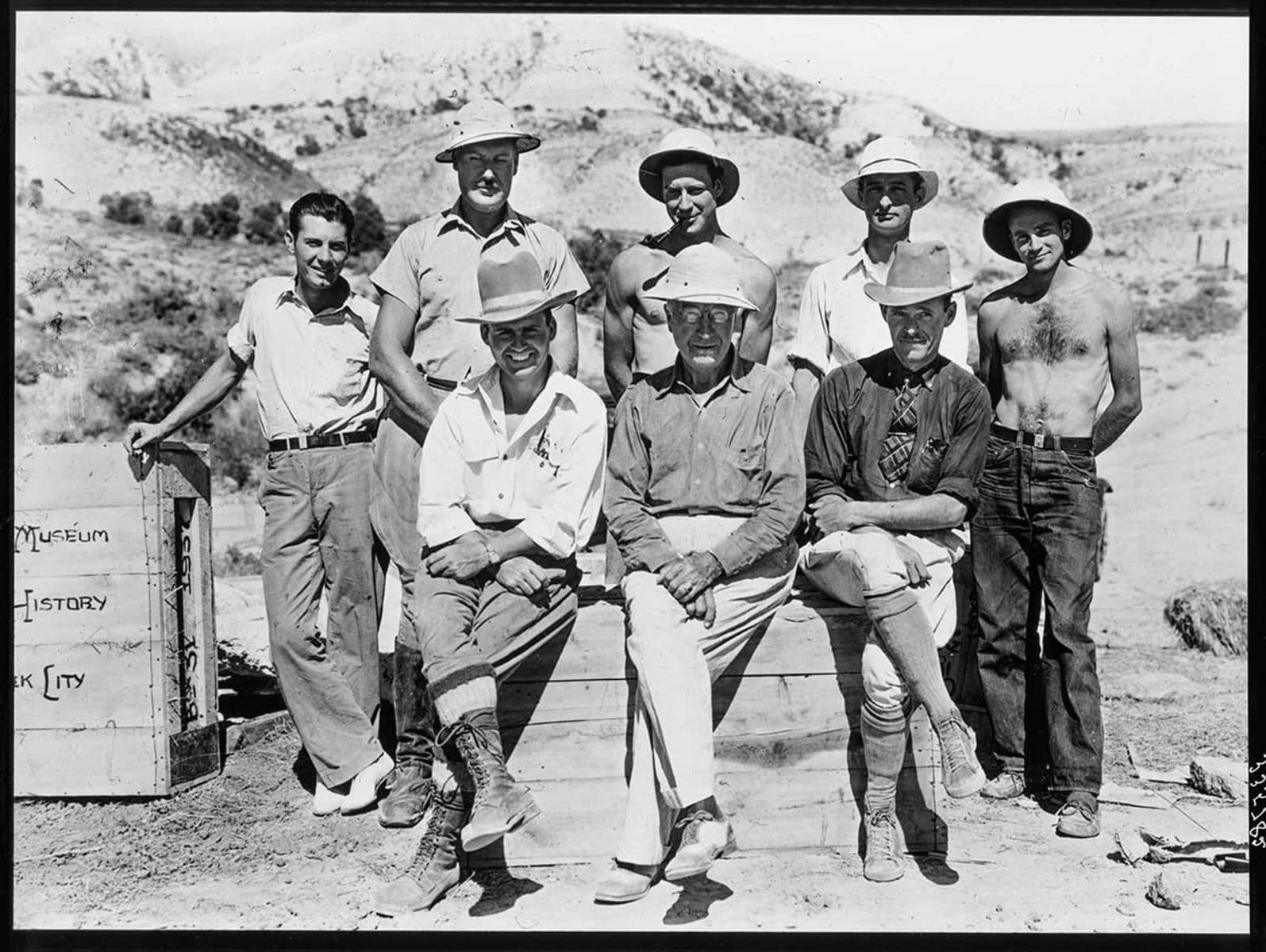 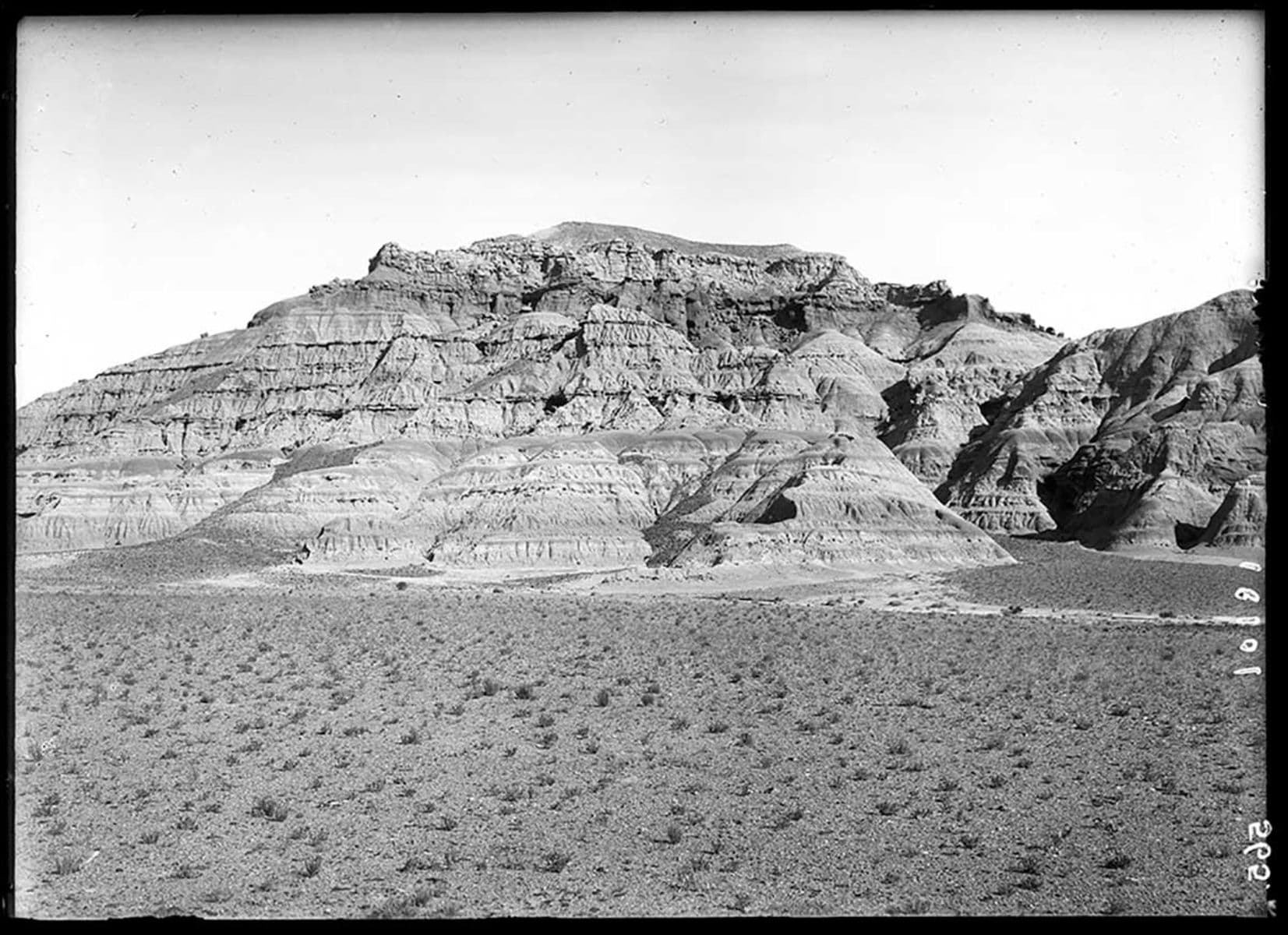 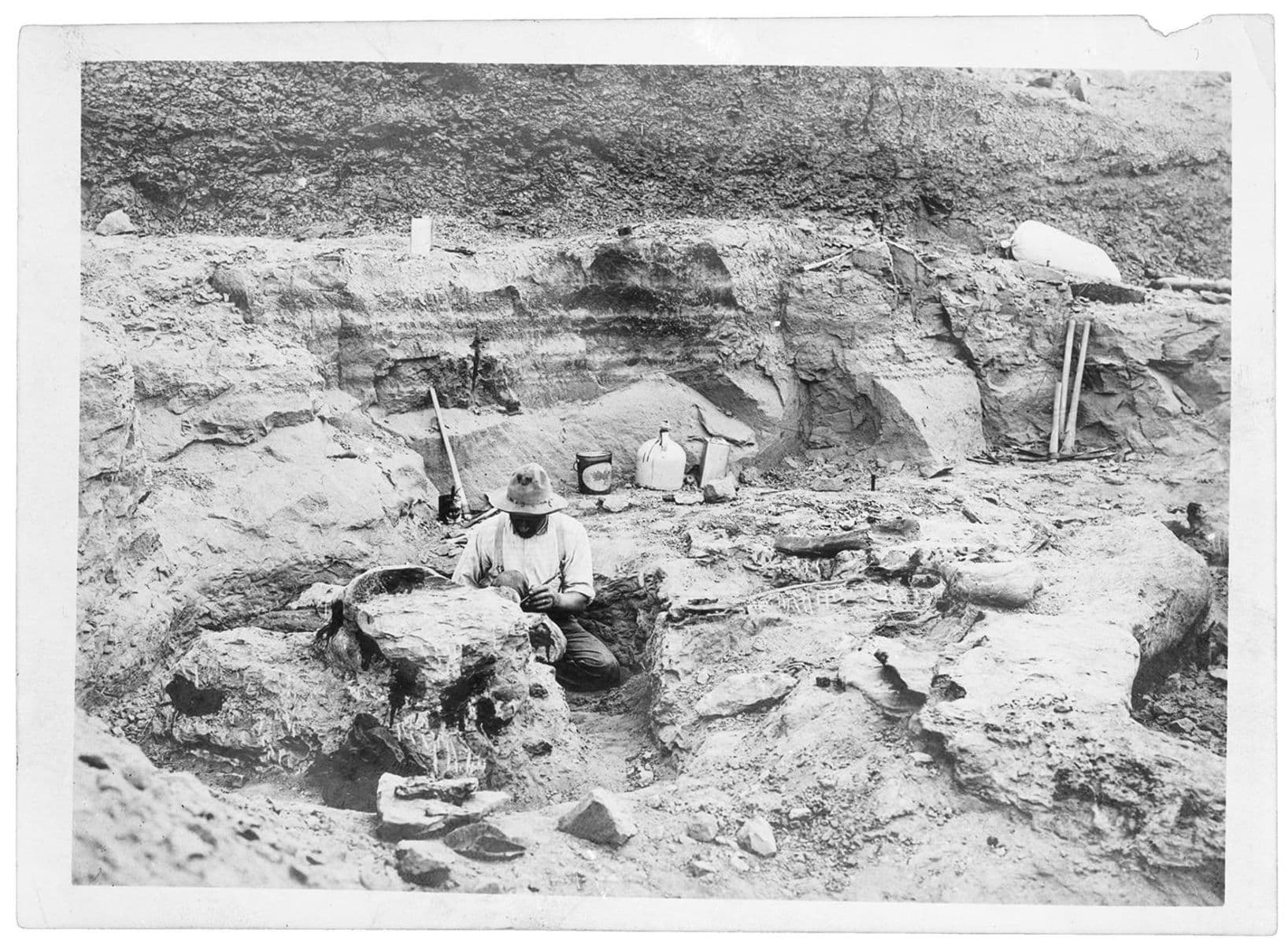 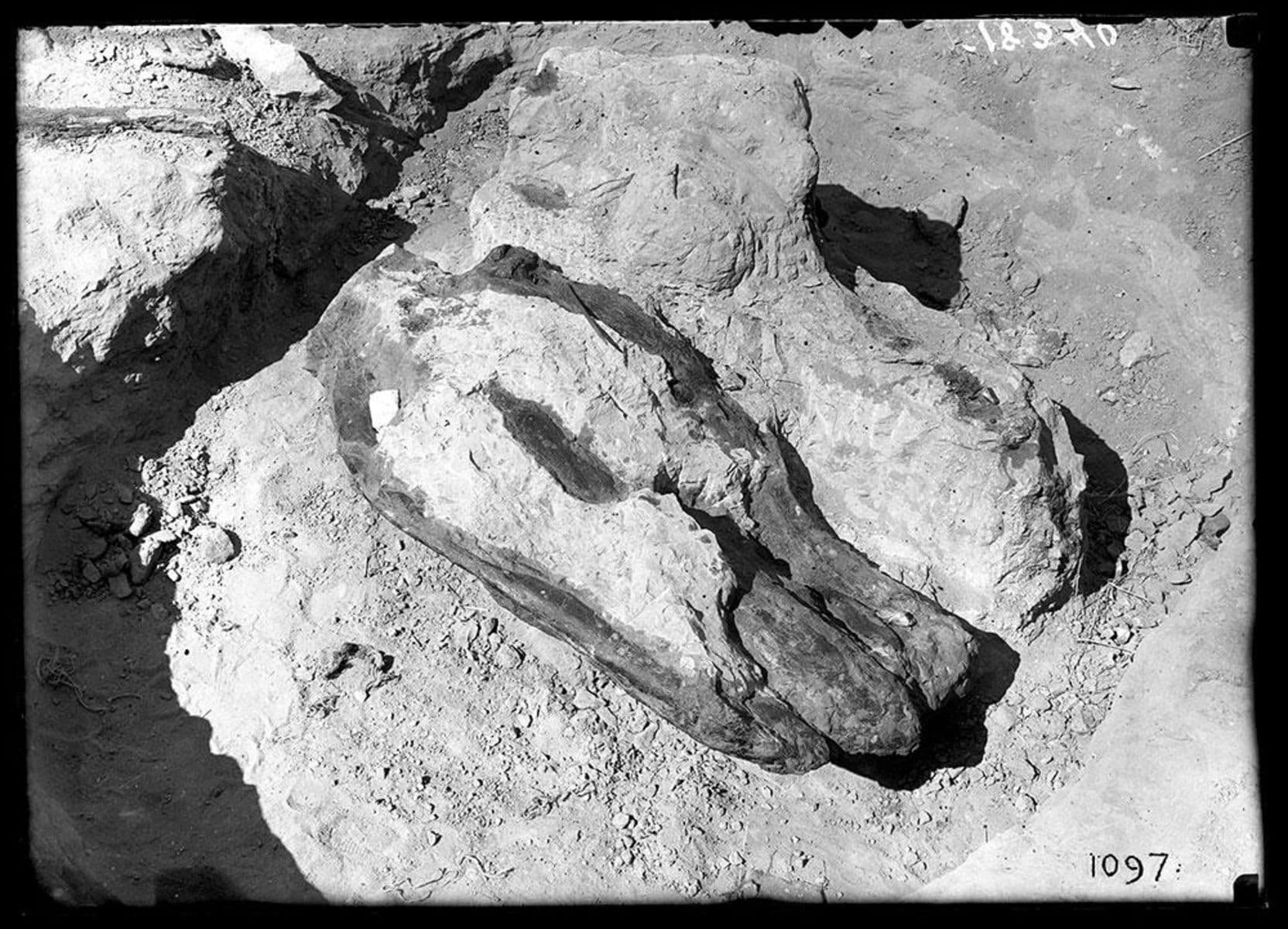 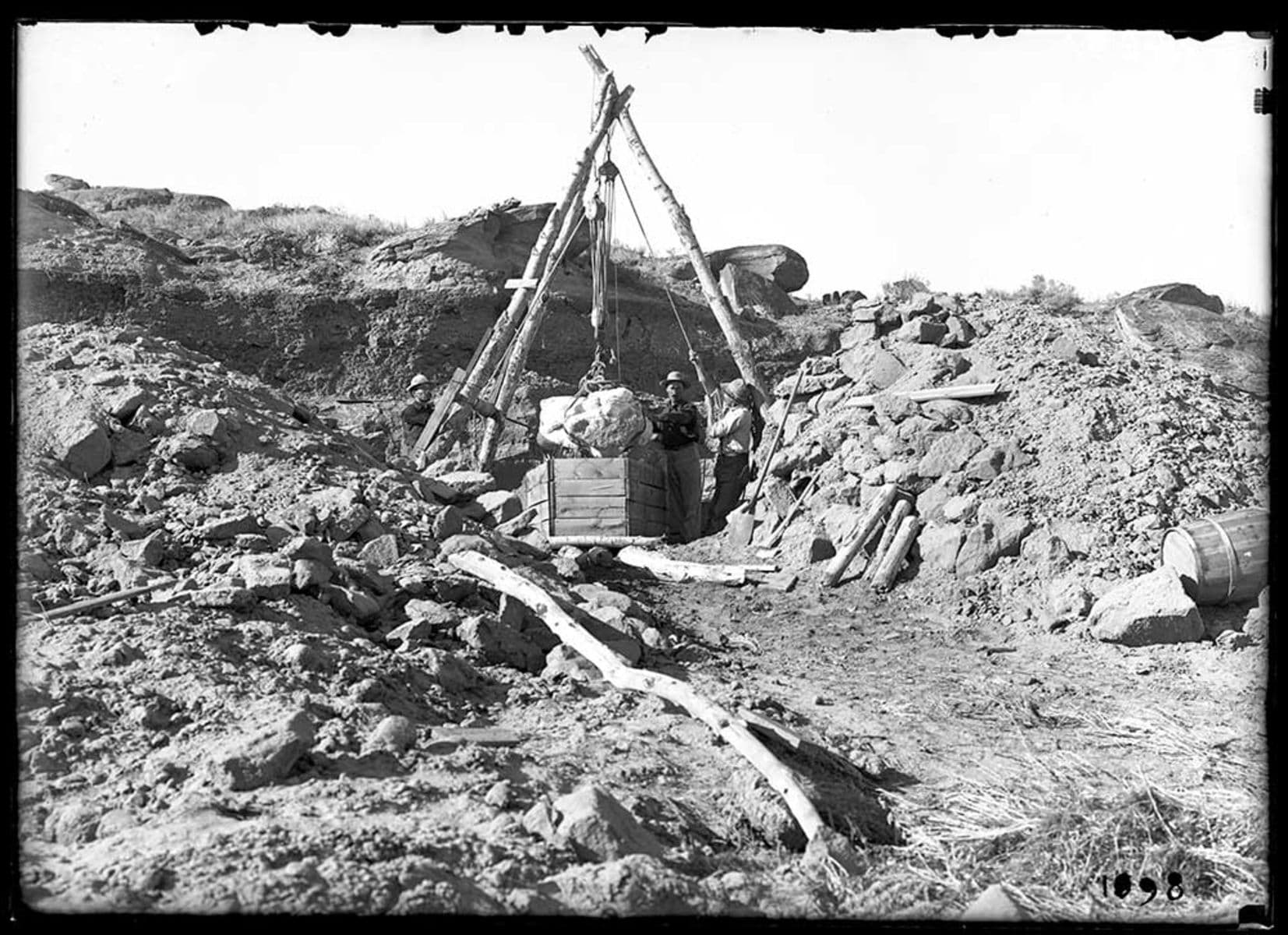 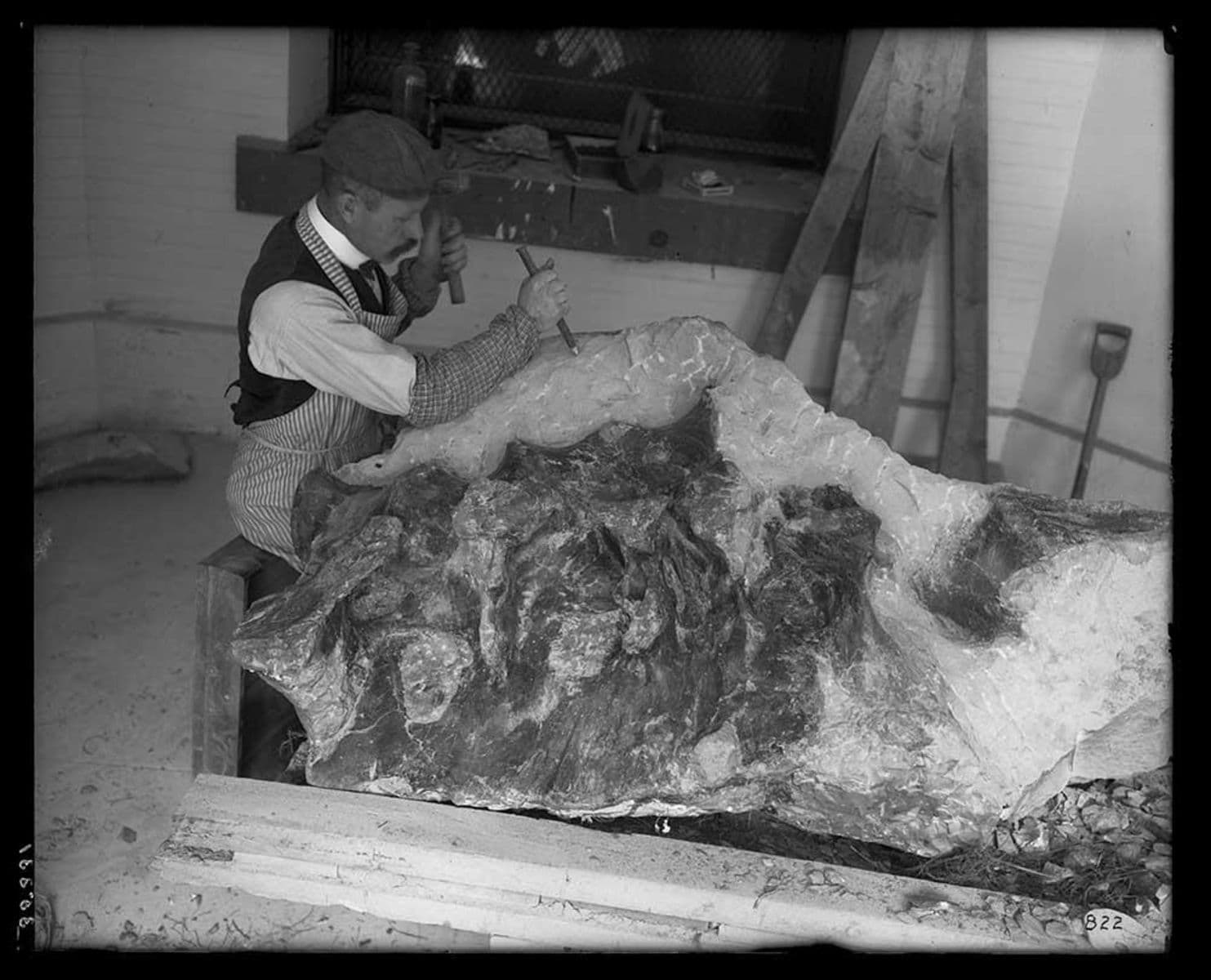 T.  rex pelvis back at the Museum. 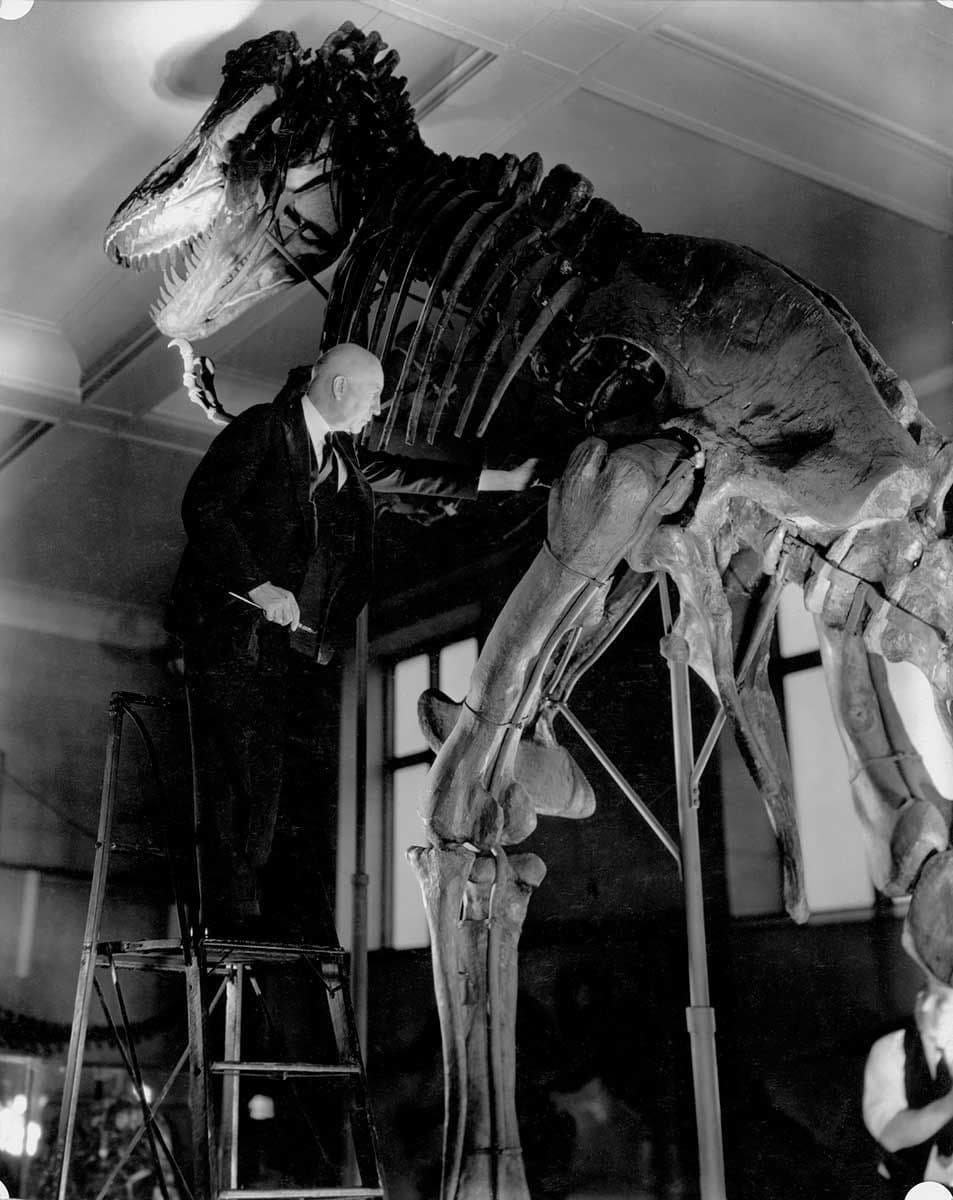 Barnum Brown in the American Museum of Natural History,
circa 1938. 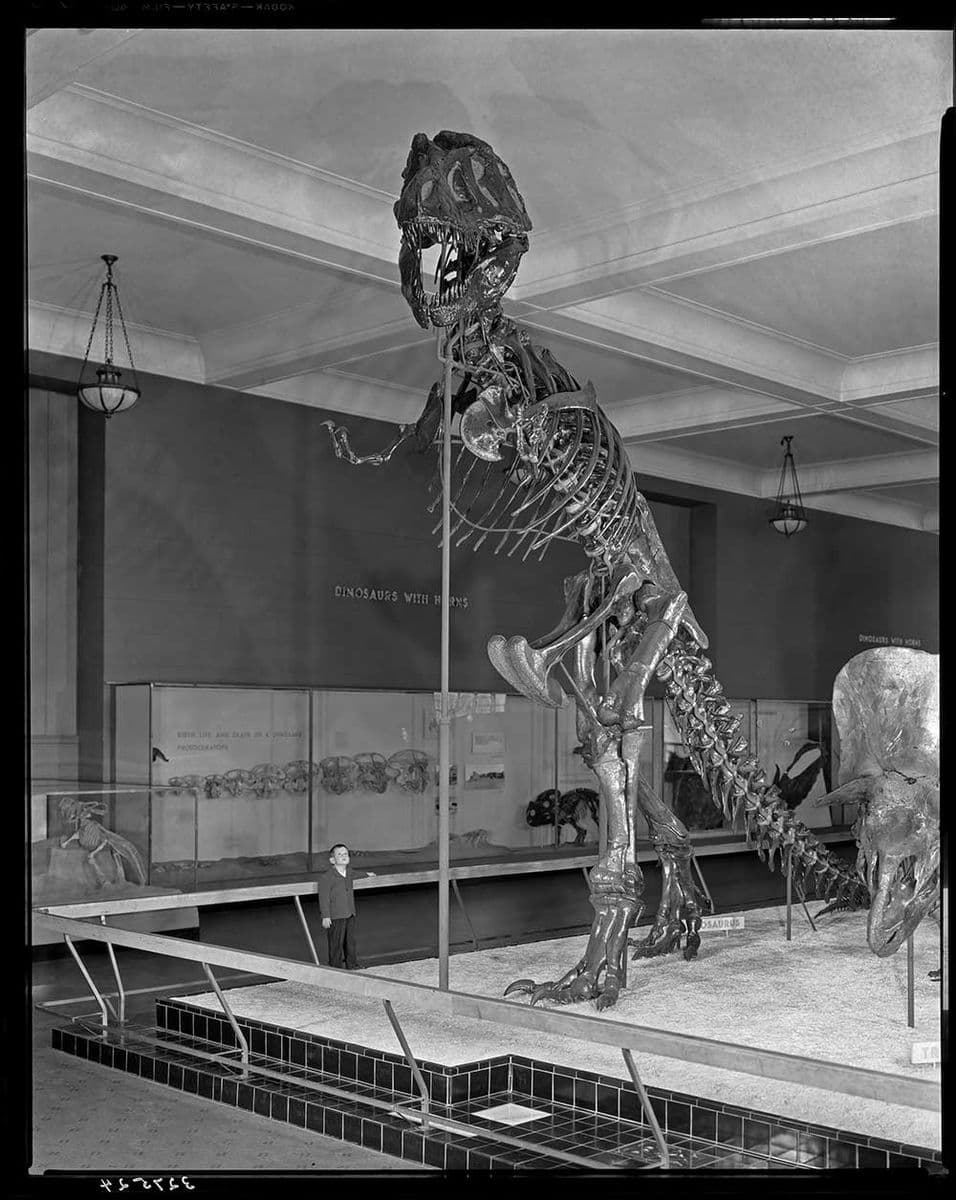