What Is Polio? A potentially deadly virus that mainly affects children.

Symptoms: One in 200 infections leads to permanent paralysis, and 5 to 10% of those cases result in death.

Can It Be Eradicated? Yes, through widespread vaccination.

This is the status of wild poliovirus; vaccine-derived cases still occur. 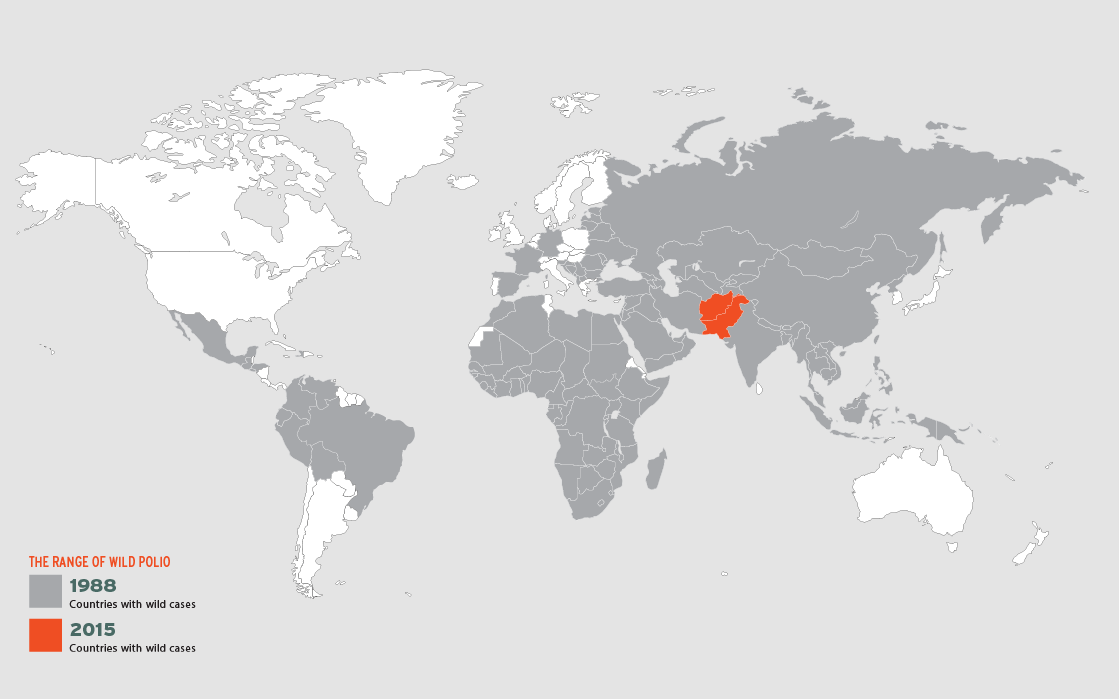 Since 1988, polio has been eliminated in 122 countries. Only Pakistan and Afghanistan have never interrupted transmission of wild polio virus. New wild type 1 cases have recently appeared in the previously polio-free countries of Syria, Iraq, Cameroon, Equatorial Guinea, Ethiopia and Somalia.

Remaining cases of wild polio are type 1. Wild type 2 polio appears to have been completely eradicated (the last naturally acquired case was in 1999). Transmission of wild type 3 polio is believed to have been stopped.
The World Health Organization certifies polio elimination on a regional basis, and has certified the following regions free of wild polio:
Region of the Americas (1994); Western Pacific Region (2000); European Region (2002); South-East Asia Region (2014). The African Region and the Eastern Mediterranean Region have not yet eliminated wild polio.

The world has made extraordinary progress in its fight against polio—and it can be tempting to think the disease is no longer a problem. But as long as the infection exists anywhere, its ability to spread means it remains a global threat. To be fully eradicated, a disease must be eliminated in every town, village and neighborhood throughout the world.

Global efforts to eradicate polio began in 1988. By 2012, the campaign had reduced the disease to just a few hundred cases each year. But ongoing conflicts in endemic areas have slowed progress, and the disease has even made a return in places that were previously polio-free. We are at a critical point in the eradication process: while the end is in sight, failure now would quickly lead to thousands of new cases. 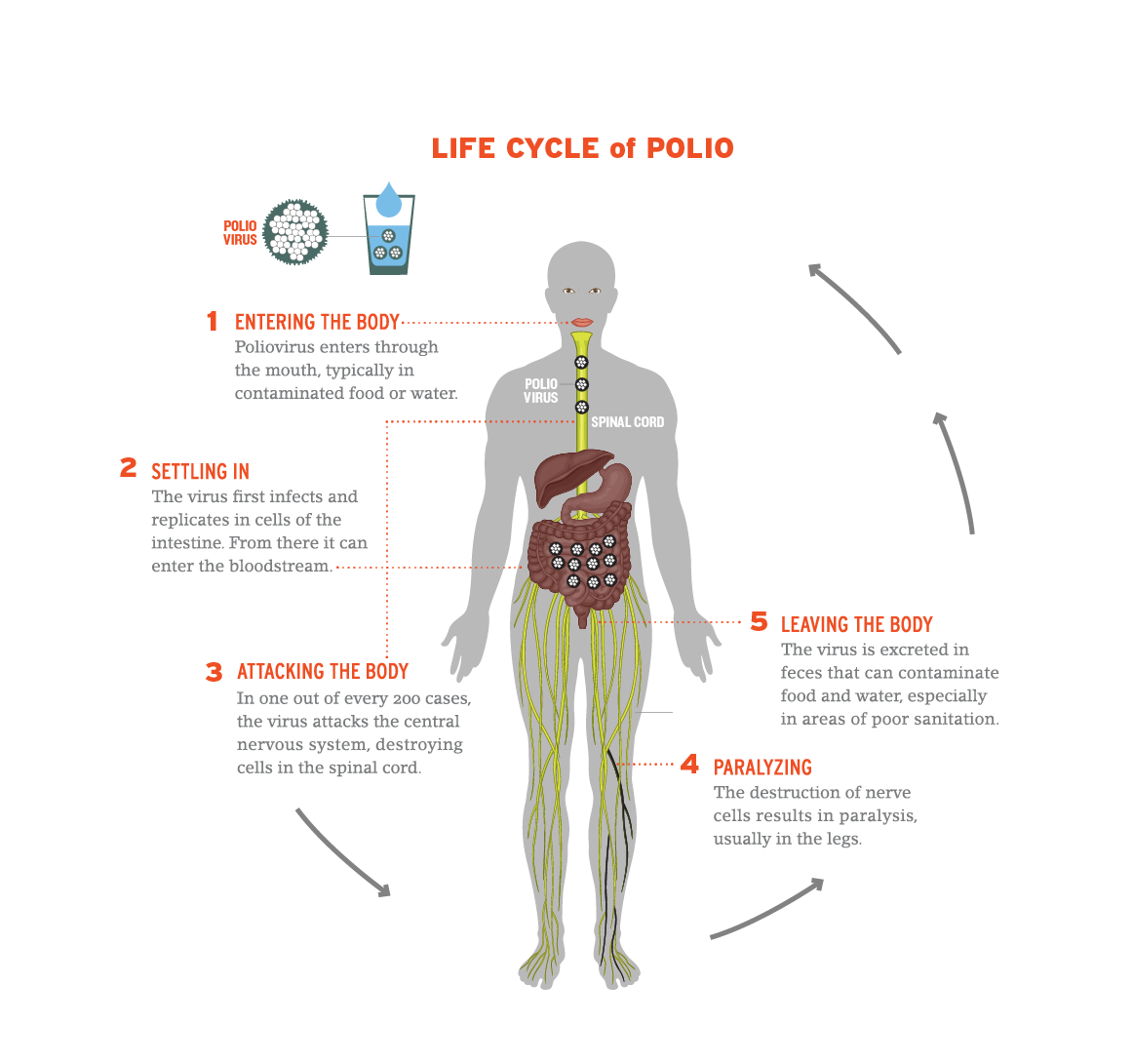 Polio’s Past and Present

Polio has been around for millennia, but it was not until the late 1800s in Europe and the U.S. that the world witnessed the first great polio epidemics. Ironically, the increase in cases is linked to improved hygiene at the time, as infants were less frequently exposed to the virus and thus less likely to develop immunity. By the 1940s, as many as 20,000 people in the U.S. alone were paralyzed by polio each year.  In 1955, American scientist Jonas Salk developed an injectable vaccine using dead poliovirus. Six years later, Polish-American physician Albert Sabin introduced an oral vaccine that used a weakened form of the live virus. By the late 1950s, mass vaccinations were already underway across the U.S., Europe, Australia and Canada.

To many Americans, the polio epidemics of the 1950s seem like ancient history. But in other regions of the world, the threat is still present.

Afghanistan and Pakistan have never stopped transmission of wild poliovirus, and cases of the disease have been known to show up in formerly endemic countries. To prevent new outbreaks, teams of vaccinators go door to door in search of children who need to be vaccinated. Because most people infected with the virus will have no symptoms, vaccination rates must remain high throughout these areas. In most places, an oral vaccine has been the preferred method of prevention. It’s safe, inexpensive and easy to administer—and multiple doses of just a few drops each can protect a child for life. The international campaign announced a phased worldwide switchover to injectable vaccine in 2016, as part of the endgame strategy.

In August 1991, two-year-old Luis Fermin Tenorio was paralyzed by polio. In 1994, after three years without any further outbreaks, Tenorio’s case of polio was confirmed  as the last one in the Americas by the Pan American Health Organization, which serves as the regional office for the Americas of the World Health Organization.

With sufficient funding, political will and manpower, polio can be vanquished. In 2009, for instance, half of the world’s polio cases were in India. With two million healthcare workers hired to reach remote and migrant populations, India saw its last case in 2011. Only two countries have never stopped transmission of wild poliovirus; however, conflict zones, where civil war and religious fundamentalism threaten vaccination efforts, present a major concern.

There were 96 cases of polio in 2015, of which about 25% were caused by the oral vaccine itself. As part of the polio endgame the international campaign announced a phased worldwide switchover to injectable vaccines beginning in 2016 to prevent vaccine-derived cases of polio.

Polio vaccine must be kept cold to remain effective. This can be a challenge when transporting the vaccine to remote regions of Pakistan.