Museum biologists discover a glowing menagerie underwater in the depths off the Solomon Islands.

On land and above the ocean surface, sunlight contains all the colors of the spectrum, from violet to red, each with its signature wavelength. But dive underwater, and light quickly changes. By about 20 to 30 meters below, clear ocean water absorbs every color other than blue. Violet, green, yellow, orange, and red disappear, leaving a narrow band of wavelengths in the blue range. This is why the ocean is blue.

Only now are scientists recognizing what this singular blue world means for the creatures that live in it. In September 2013, John Sparks, curator in the American Museum of Natural History's Department of Ichthyology, led a research team on a pioneering set of dives along the dazzling coral reef walls of the Pacific Ocean’s Solomon Islands. It was the inaugural expedition of the Museum's Explore21 scientific initiative, and anticipation was high.

Donning scuba suits and special observational gear—all custom-developed after months of trials—the researchers submerged from the research vessel Alucia. They saw the pristine reefs as few people have, but many fish do: spectacularly aglow in neon colors. This phenomenon, called biofluorescence, is stimulated by the ocean’s ambient blue-light environment, visible only to those equipped to see it.

By venturing into little-explored waters and utilizing cutting-edge techniques, the Explore21 biologists discovered that biofluorescence is not rare in marine life like it is in land animals. “It’s extremely widespread,” says Sparks. “Much more so than we ever thought it would be.” 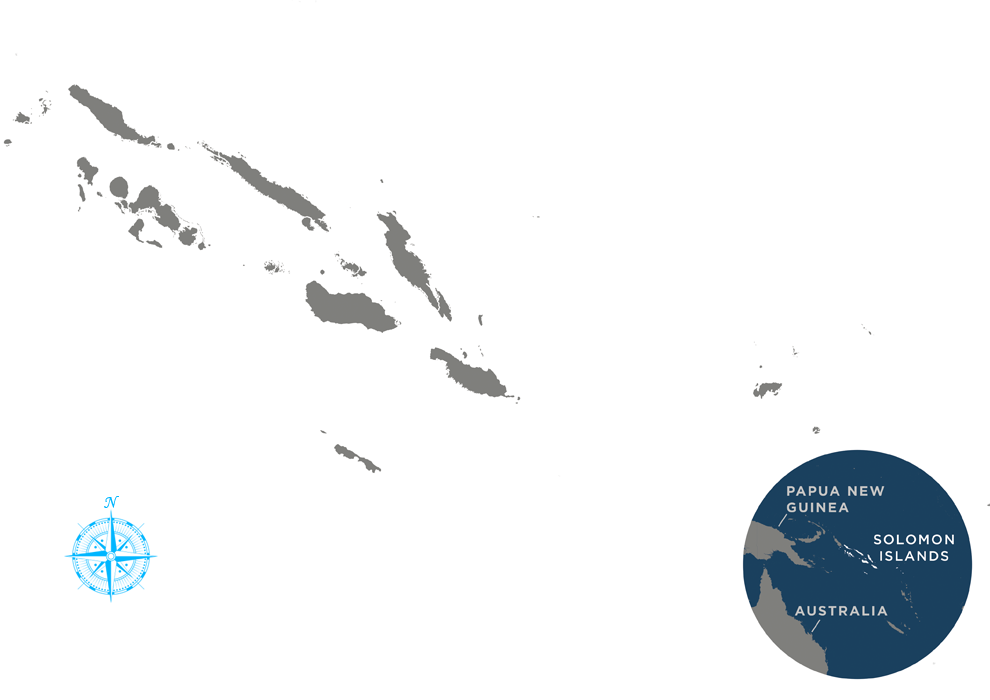 The Solomons are an archipelago of nearly 1,000 islands just east of Papua New Guinea in the western Pacific Ocean. They are part of the Coral Triangle, an area of astonishing marine biodiversity.

The Solomons are an archipelago of nearly 1,000 islands just east of Papua New Guinea in the western Pacific Ocean. They are part of the Coral Triangle, an area of astonishing marine biodiversity.

The upper 200 meters of the ocean is the brightest. Scientists call it the euphotic zone. It’s where sunlight can penetrate the most and algae, protists, and plants can photosynthesize. Food is abundant, so most marine life lives here.

This bright region is also where biofluorescence prevails. When stimulated with the thin window of blue wavelengths here—just 480–490 nanometers—cellular compounds in many sea creatures absorb the blue light, transform it, and emit it at longer, lower-energy wavelengths. The change in wavelength means a change in color. Depending on the composition of their compounds, the organisms will emit green, yellow, orange, or red, often with gorgeous patterning.

“Our first goal,” says Sparks, “is to find out how prevalent biofluorescence is in reef communities and learn what molecules are responsible for this phenomenon.” Then, his team can venture into explaining how this spectacular trait evolved in various groups of organisms. “We know so little right now,” he says. “It’s an entirely open field.” 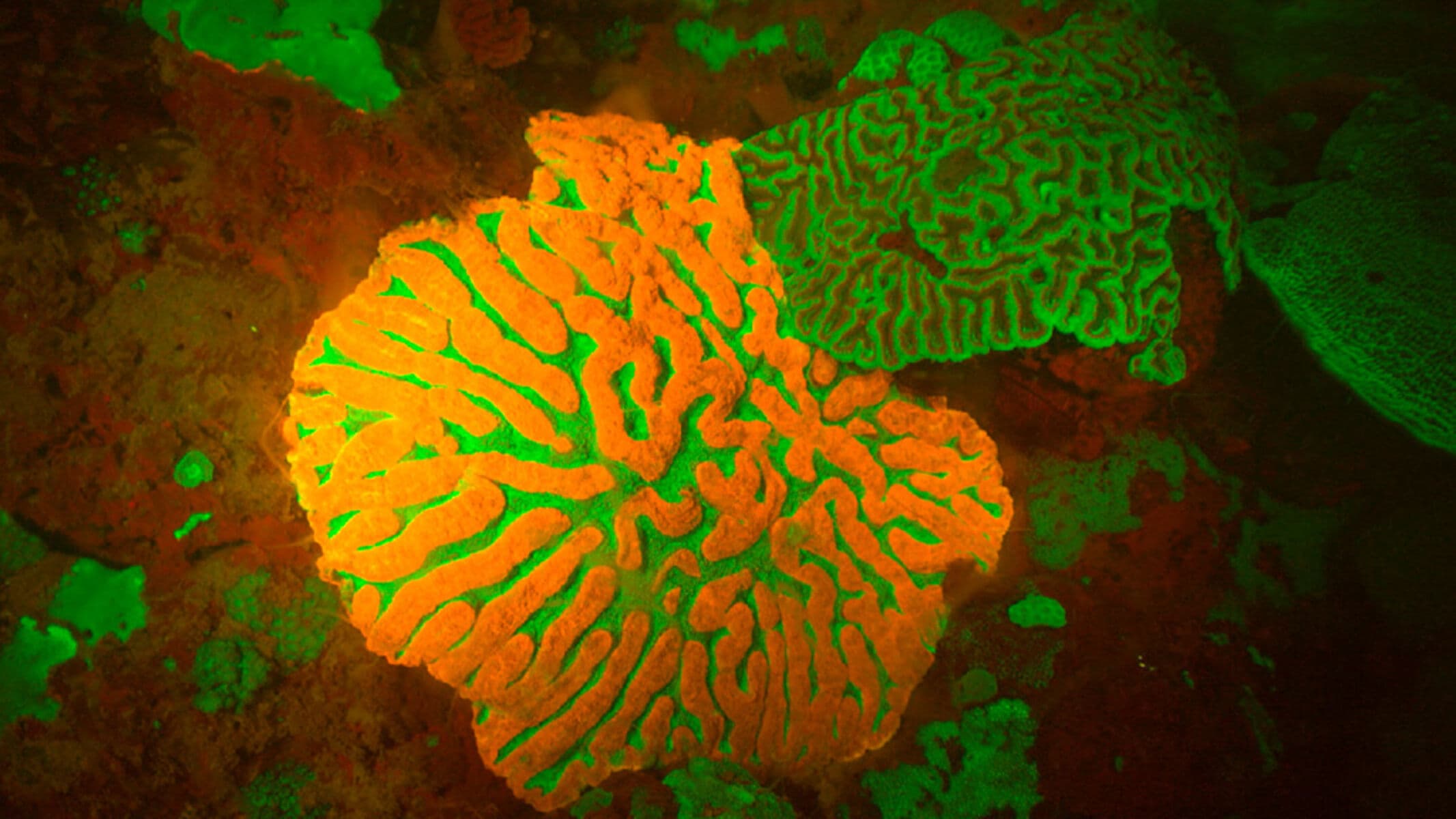 Fluorescent compounds in corals may serve as a sunscreen, protecting them from harmful ultraviolet rays. 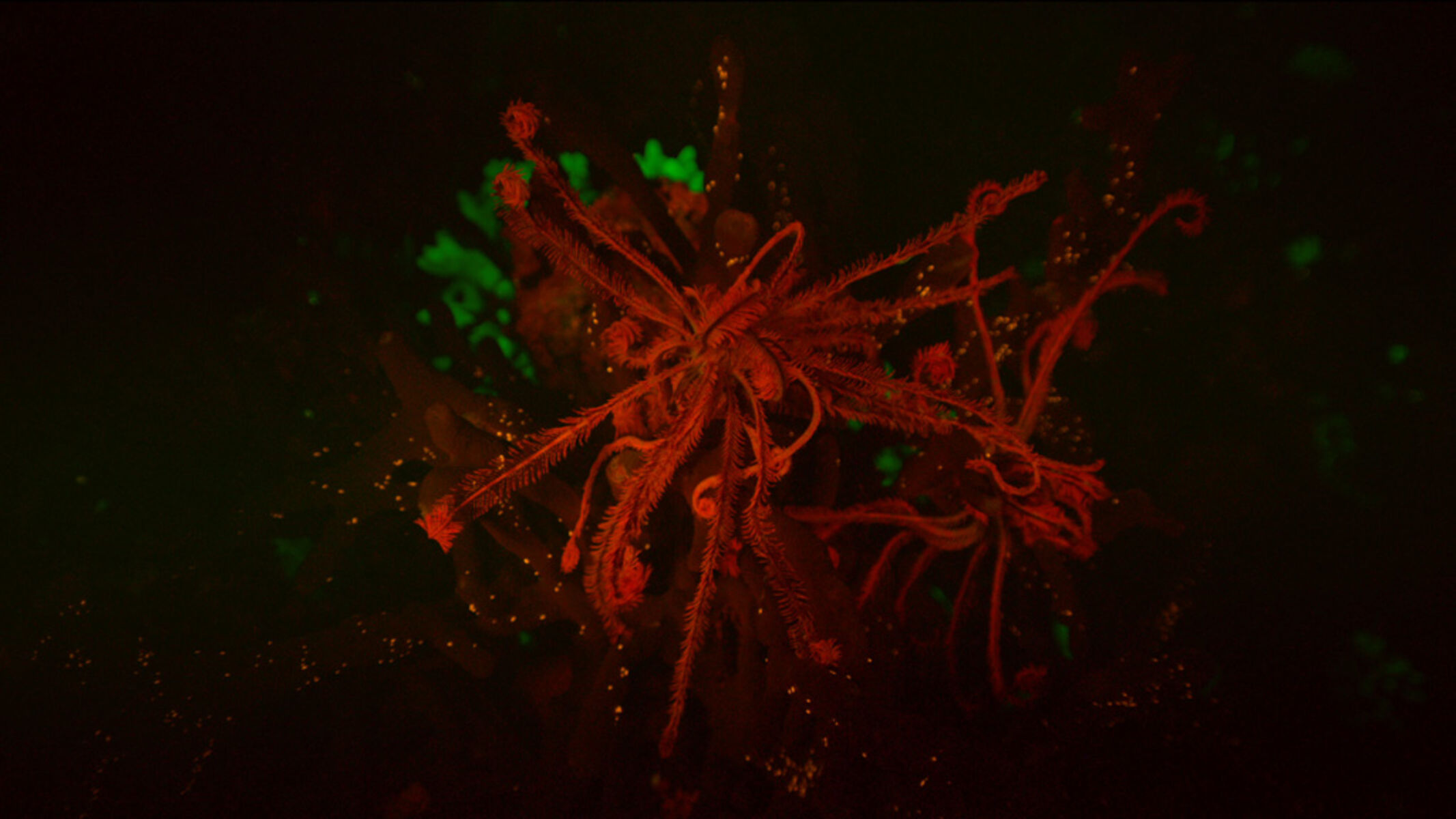 Uncommon invertebrates called crinoids (related to sea urchins) were not known to be fluorescent until this expedition. 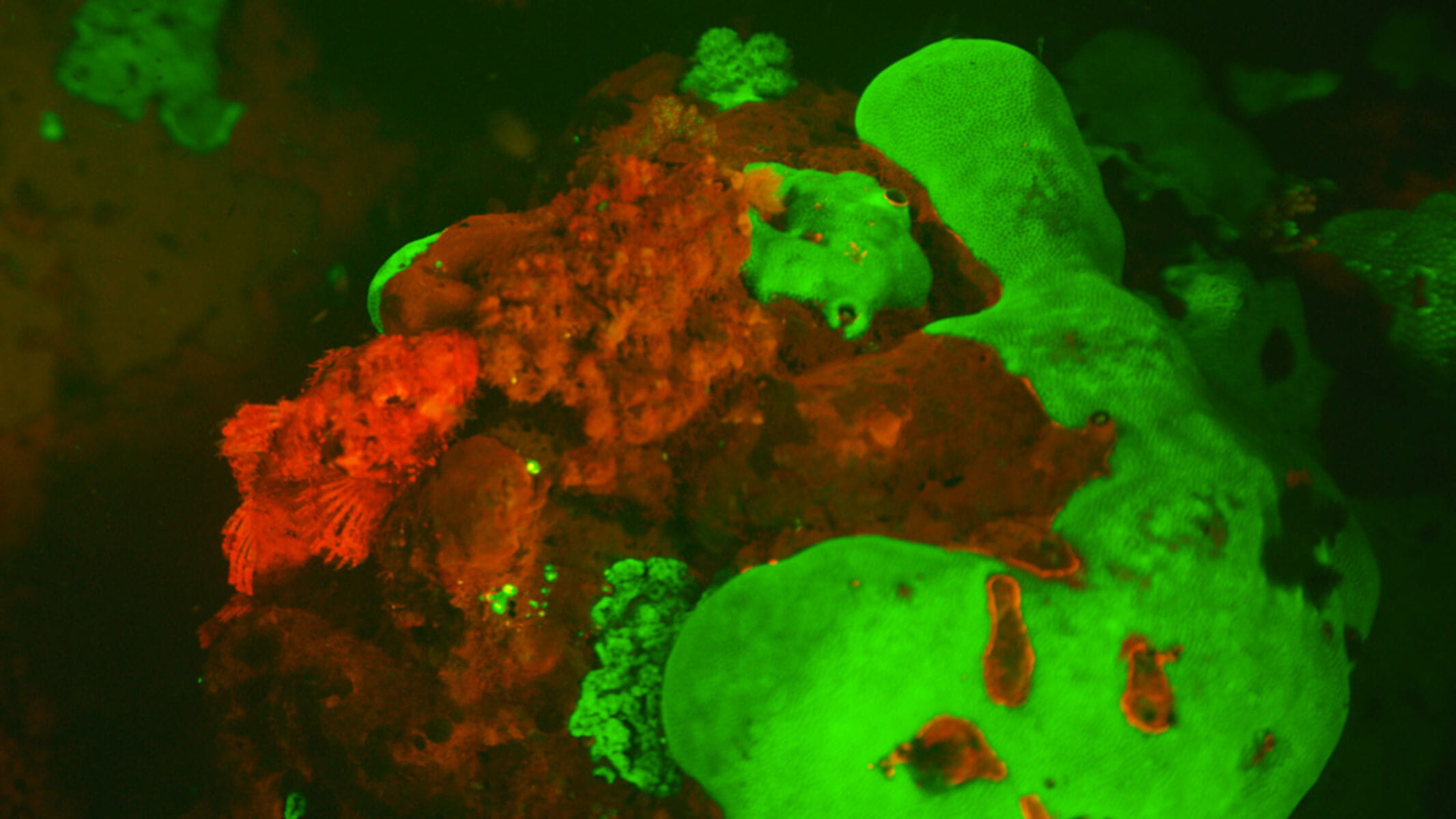 See the scorpionfish hiding against the red-glowing algae-covered rocks? The fish may fluoresce red in order to blend in. 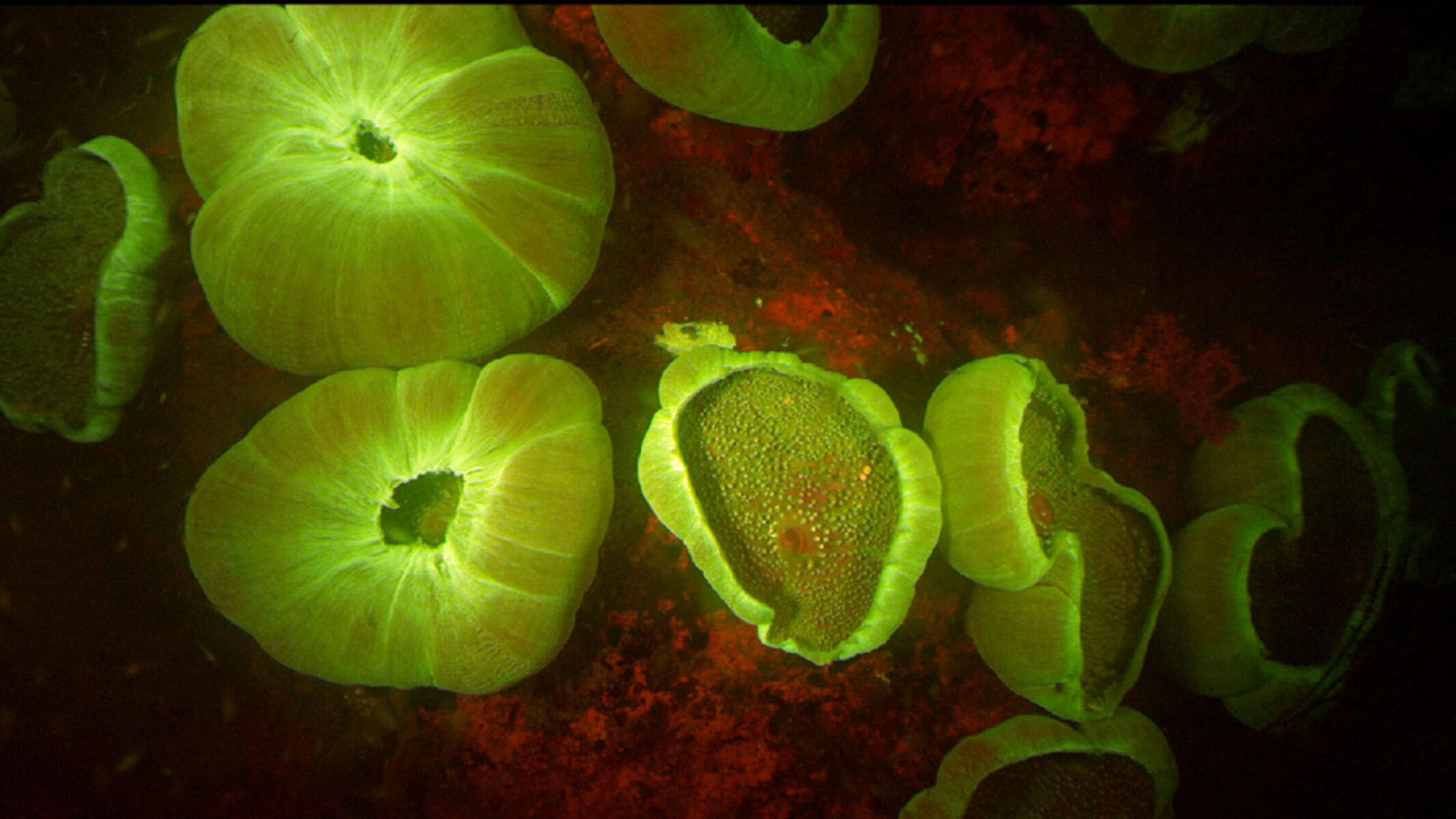 These anemones glow in two colors because of different compounds in their tissues. 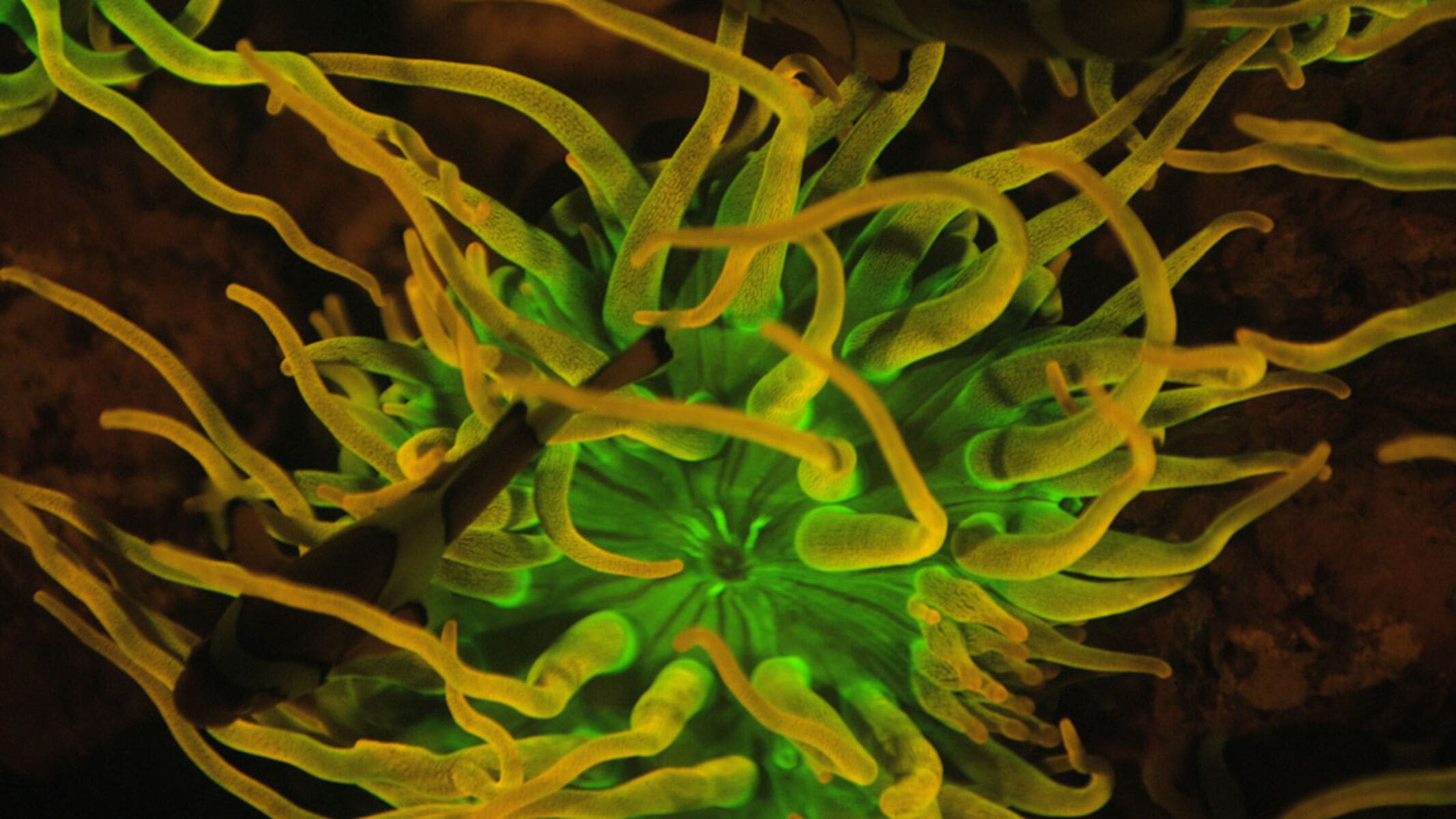 This anemone is biofluorescent, but the clownfish swimming within is not.

The blaze of biofluorescence happens 24 hours a day, but most divers don’t see it. During the brightness of day, the effect is only weakly visible. The blue light scattering about the euphotic zone, especially in clear waters like in the Solomons, overwhelms the biofluorescent emissions from the animals. So the Explore21 team created greenish-yellow visors for their scuba masks that filter out all blue light, leaving only the pure neon glow.

The scientists dropped into dark, nighttime waters to see the light show best. “Which is a bit unnerving,” remarks Sparks. “If you take a chance to scan behind you with a flashlight, you see sharks shooting by.” The research team developed their own LED system to illuminate the dark reefs with high-intensity 480 – 490 nanometer blue light, the same range naturally present during the day. They mounted the excitation lights on modified video cameras. Like the visors, the camera lenses used green filters to eliminate blue light reflecting back from their lighting system.

The result was stunning. “It’s a completely bizarre world,” says Vincent Pieribone, a neurobiologist from the Yale School of Medicine who was on the research team. “The pictures don’t do justice to how beautiful things look.”

Before the Solomons expedition, nobody knew how common biofluorescence was in marine life.  Although scientists long reported glowing cnidarians—corals, jellyfishes, and their relatives (the green fluorescent proteins used in medical imaging were sourced in the 1960’s from the cnidarian Aequorea victoria), Sparks and his team discovered that many species of common reef fish also glow: tiny gobies, many types of eels and flatfishes, and even some sharks and rays.

Capturing small reef fishes glowing live on camera was nearly impossible, though. These species are active in the daytime and tend to hide in reef crevices from sharks and larger fishes at night. So the team collected thousands of fish specimens in the euphotic zone. They brought each up to the Alucia to photograph in both natural light and blue light.

The variety and prevalence of the glowing patterns astounded them. “This was a super exciting finding for us, seeing the diversity of biofluorescence across the tree of life for fishes,” says David Gruber, a Museum research associate and City University of New York professor. The widespread incidence of biofluorescence suggests that it evolved not just once, but many times independently in different lineages.

As the work continues, biofluorescence may prove even more common than it’s known to be at the moment—and more interesting.

Why did it take so long to discover fluorescent fish? "You've got to be in the water at night, which most divers don't experience."

Since the study of fish fluorescence is so new, Sparks and his colleagues can only infer what functions the trait serves. After the team identified the glowing species, some ideas emerged. “We noticed fluorescence showed up more often in cryptically patterned, well-camouflaged fish lineages,” says Gruber. Cryptically patterned animals are those whose ordinary coloring camouflages them well in their surroundings.

When viewed through a greenish-yellow visor or filtered camera, these hidden fish flare like traffic lights, such as the plain brown scorpionfish that turns a brilliant mottled scarlet. But being bright can actually help them avoid notice. If a scorpionfish swims against a red-fluorescing backdrop, it is camouflaged to other fishes that can detect red wavelengths.

When photographing fish on the Alucia’s deck, the scientists realized that many fish’s fluorescent markings differ greatly from their ordinary markings. The pattern differences suggest that biofluorescence may help fish recognize their own kind. Some closely related fish groups look nearly identical in natural light. One hundred species of gobies, for example, may appear to be a single species, distinguishable only by extremely subtle anatomical details or DNA analysis. “Specialists even have difficulty telling them apart due to their very similar pigmentation patterns,” says Sparks. But under blue light, they look strikingly different. A fish could find its peers for mating and social interaction by scanning for the distinct fluorescent pattern. 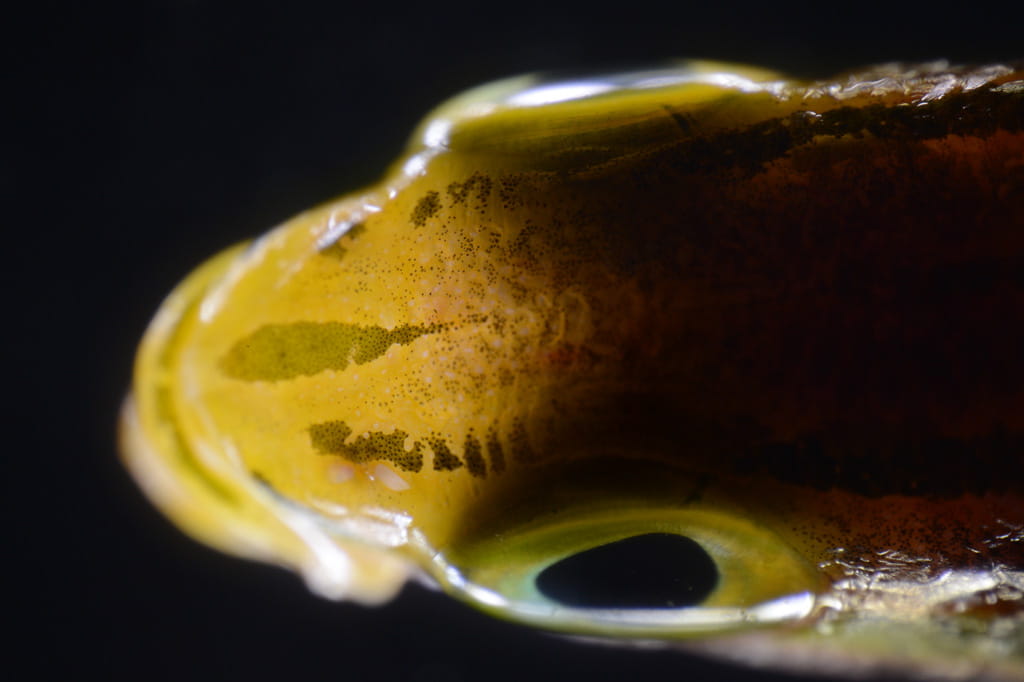 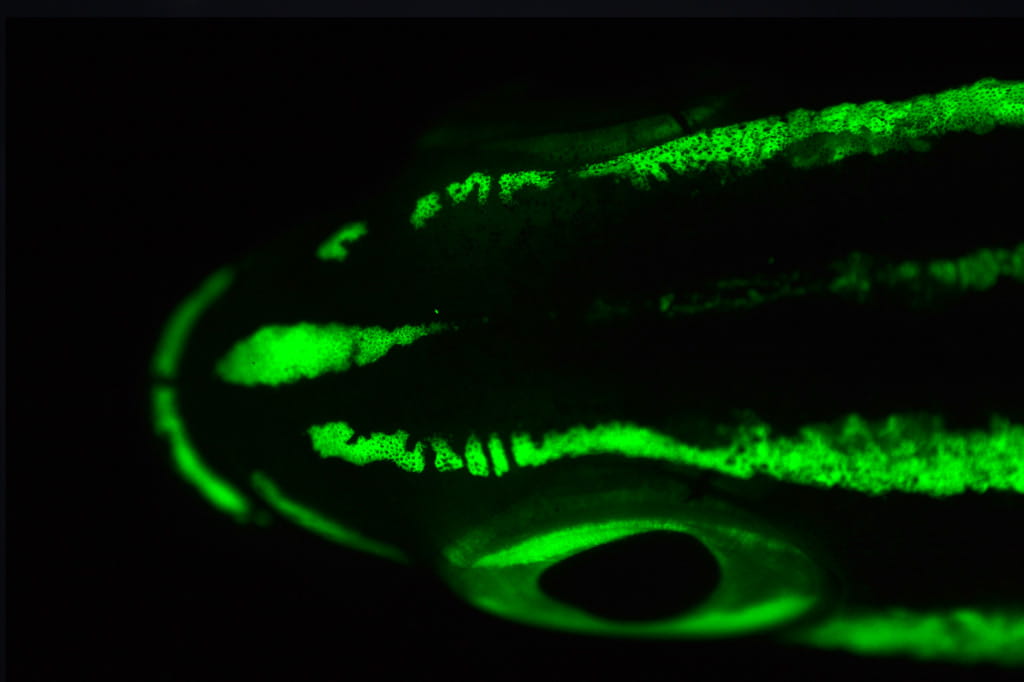 Are fish able to see their own biofluorescence? Little is known about their color vision at this stage, but one clue came from a 30-year-old research paper that Sparks found. The authors, while dissecting hundreds of fish eyes, found greenish-yellow filters in the corneas or lenses of many species. Many of these species happen to belong to the same groups that glowed in the Solomons.

The greenish-yellow eye filters may act like the diving team’s greenish-yellow visors, allowing these fish to detect fluorescence well. “We think it might give them a private way to signal each other,” says Sparks. “All the fish you’re communicating with would have the filter specific to your coloring. But a predator without the filter that’s lurking by wouldn't see you well.”

Descending beyond 200 meters, ocean water gradually turns a soft, dark blue. Looking up, a halo of light is still visible above, but beneath, blackness awaits. A small amount of light still penetrates into the twilight, or disphotic, zone between 200 and 950 meters deep, but it dissipates further with every meter. The team wanted to know: does biofluorescence exist in the dark ocean deep?

The Explore21 divers’ scuba gear was good to depths of only 60 meters. For deeper forays, the scientists glided silently down the reef wall in a three-person submersible. Its clear acrylic bubble offered stunning 360-degree views.

The submersible was small and state-of-the-art, a prototype of a new model called the Triton 3300. The Solomons expedition was among the submersible’s first voyages. The team spent months designing a custom camera system for this vehicle that they could control as they piloted. On the front of the submersible, the scientists mounted bright blue LED lights and a custom high-definition camera. Other cameras imaged the reef organisms under white light for side-by-side comparison and identification. The system passed its first test with flying colors. “Surprisingly,” says Sparks, “Every single camera worked.”

But even with the most modern equipment, the Explore21 team spotted few biofluorescent creatures during deep descents. Past 200 meters, the brilliant throng of neon quickly fades. Every few hundred meters, a creature would fluoresce like a lone firework in the dark—a whip coral here, an anemone there. These rare spottings, though, beg an intriguing question: If you live in the dark but need light to glow, how do you do it? Maybe the ambient twilight is still enough to excite fluorescent compounds, speculates Sparks. Or perhaps these creatures evolved in the bright euphotic zone and wandered over evolutionary time to deeper waters, retaining their ancestral abilities.

The team’s next challenge is to develop better technologies for collecting organisms while diving deep in a submersible. One potential solution is a next-generation “atmospheric diving system” that permits maneuverability in crushingly deep waters. Sparks tested this astronaut-style Exosuit in Cape Cod waters last year.

The team members are also designing blue lights that are several times brighter than those used in the Solomons expedition, providing stronger excitation of fluorescence, a wider view, and a sharper picture for the next journey. Sparks has his eye on other diverse marine realms such as Australia’s Great Barrier Reef and Baja’s Sea of Cortez. In the meantime, he and his fellow researchers are sequencing the DNA of fluorescent compounds in the fishes and invertebrates they collected to understand the molecular structures, trace their evolution, and uncover more about their function.

By 950 meters—around the deepest the submersible can go—only a few photons of light penetrate the ocean. For each deep dive, Sparks, Gruber, and Pieribone landed the vehicle gently on a mud-covered barren-looking bottom. The descent into light finishes here. Lucky for these researchers, they could see it again on the way back up.

This interactive article is proudly sponsored by the Irma and Paul Milstein Family.

The Museum greatly acknowledges the Dalio Foundation for its generous support of the inaugural Explore21 expedition.

The Museum's Explore21 Initiative is generously supported by the leadership contributions of Katheryn P. and Thomas L. Kempner, Jr., and Linda R. and William E. Macaulay.