The word Tlingit means “people.” Traditional Tlingit territory is the Southeastern Alaska panhandle, from Yakutat south to Ketchikan, and including the Alexander Archipelago, which consists of more than a thousand islands. 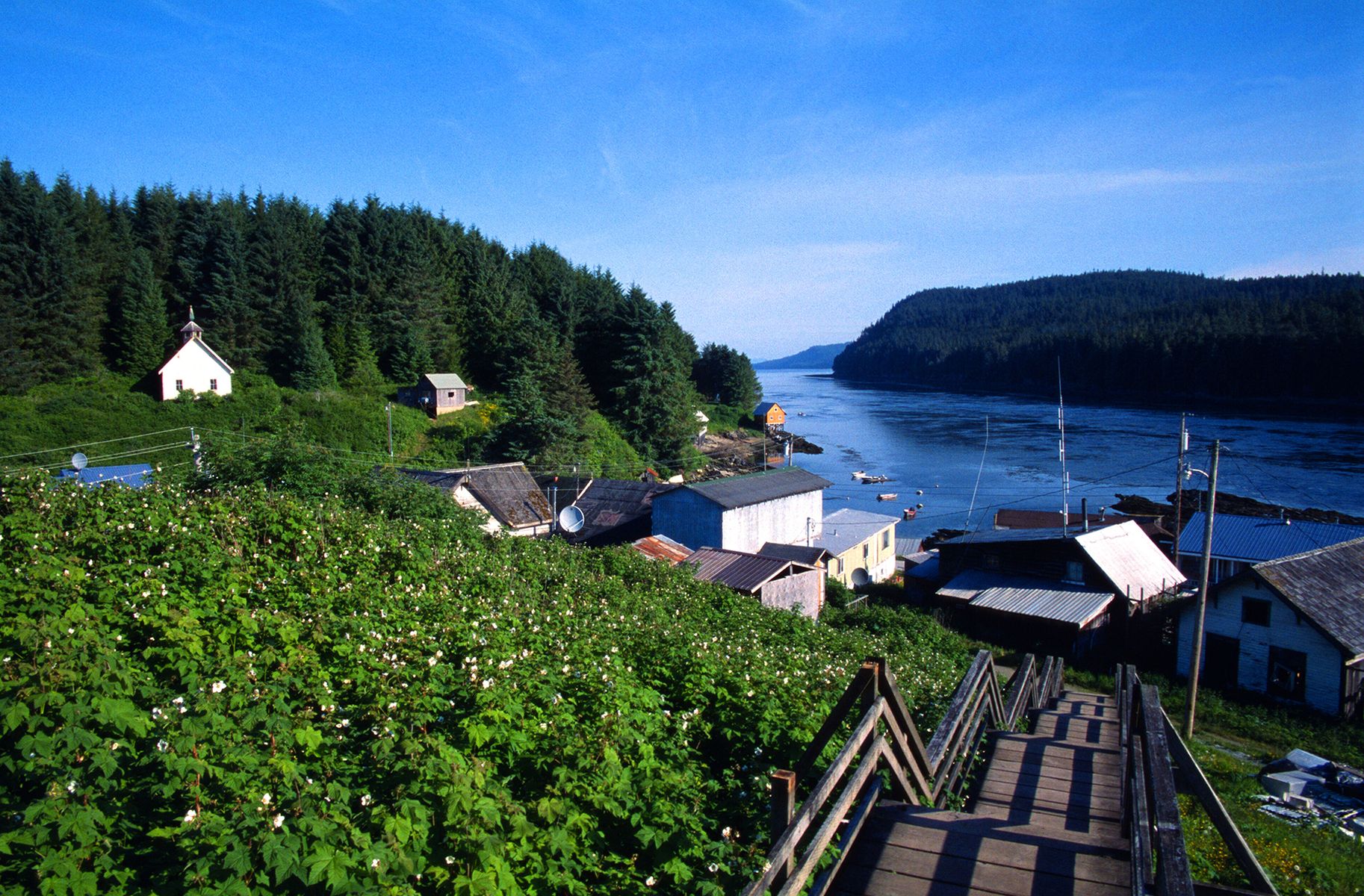 The village of Angoon is the home of the Deisheetan clan of the Tlingit. In 1882, a Deisheetan shaman named Til’x tlein died in a accident on a commercial whaling boat. After community members sought compensation for his death, a misunderstanding prompted the locally installed U.S. Navy to shell and burn nearly the entire village in response.

Til’x tlein’s nephew was away in his canoe during the shelling. When he returned, he realized his was the only surviving canoe in Angoon. The vessel was used by the community to hunt, fish, and gather fuel so that they could survive the winter. The canoe is pictured here in Angoon sometime before 1911. 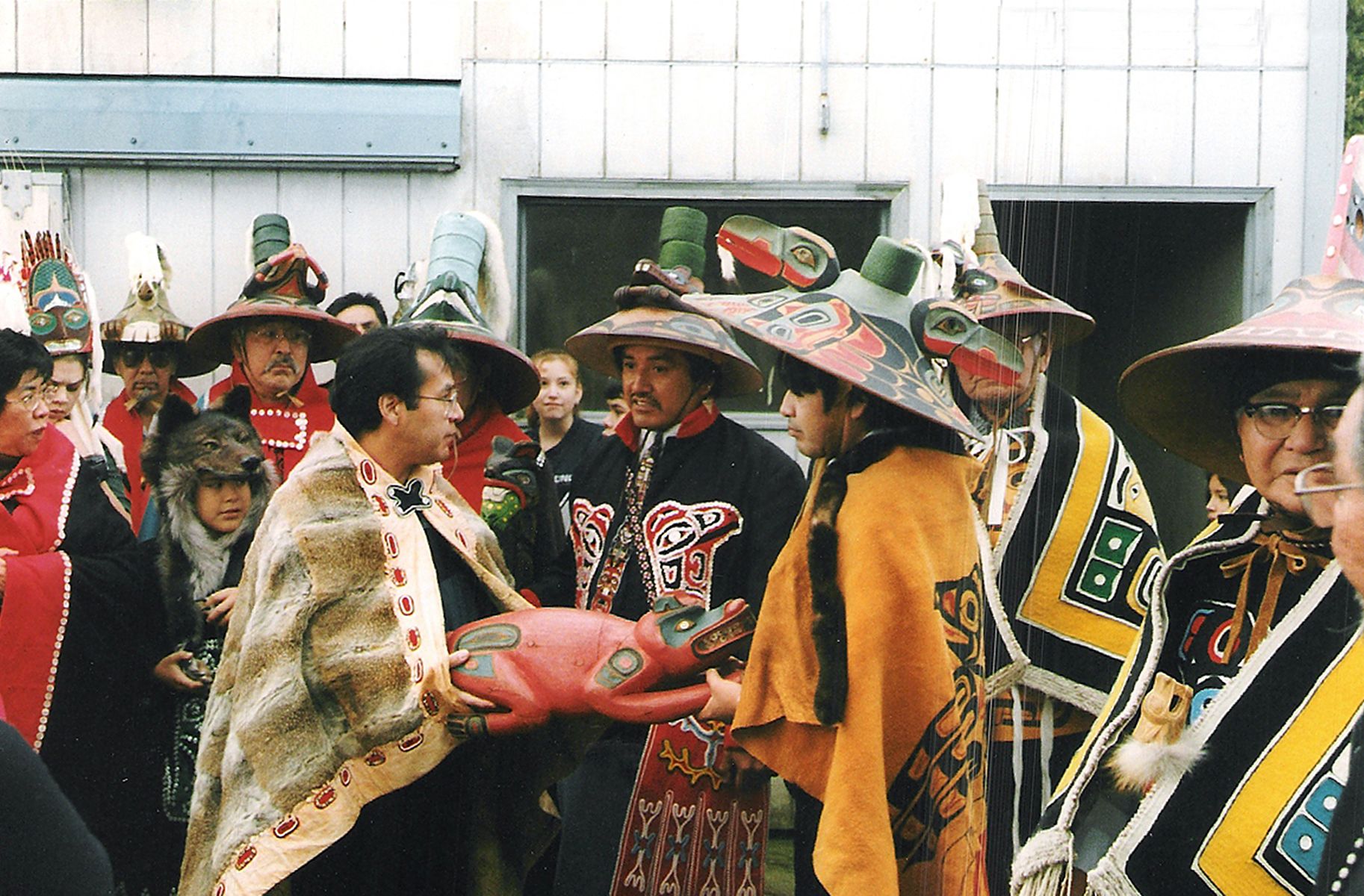 After the savior canoe was no longer seaworthy, it was cremated as a person. Eventually, the beaver carving on the prow was sold to this museum with very little information. After a Tlingit delegation discovered the beaver in the Museum’s collections in 1999, it was formally repatriated, or returned, to the Angoon villagers in an emotional reunion. 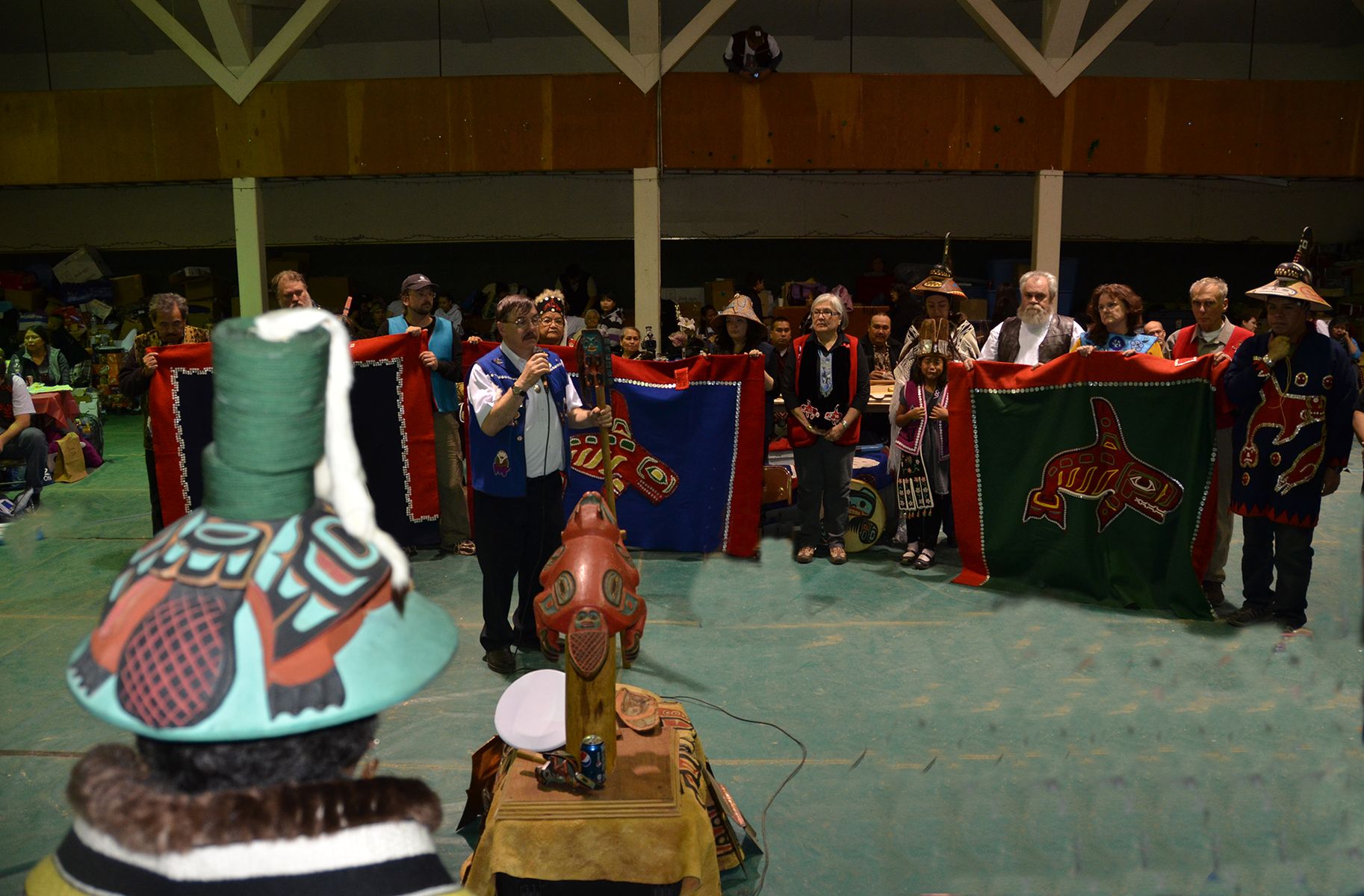 The beaver prow piece is now a central figure at every potlatch in Angoon, facing invited guests. The villagers regard it as a family member who speaks to their trials, resilience, and healing—one who will remain in Angoon through the generations.

“Lgeik'i yóo xát duwasáakw. My name is Lgeik’i. It originates from Glacier Bay, where my family comes from. It’s the sound that the glacier makes right before it calves into the water.

Soon I will be moving home to live in a language nest. Just Lingít every day, and no English. Myself, I’m a language learner. My children are very excited. It’s terrifying for me, truthfully. But my grandmother used to always say, "I gu.aa yáx̱ x̱'wán"—be strong, be brave."

“Lgeik'i yóo xát duwasáakw. My name is Lgeik’i. It originates from Glacier Bay, where my family comes from. It’s the sound that the glacier makes right before it calves into the water.

Soon I will be moving home to live in a language nest. Just Lingít every day, and no English. Myself, I’m a language learner. My children are very excited. It’s terrifying for me, truthfully. But my grandmother used to always say, "I gu.aa yáx̱ x̱'wán"—be strong, be brave."

FROM THE COLLECTIONS: Tlingit berry masher 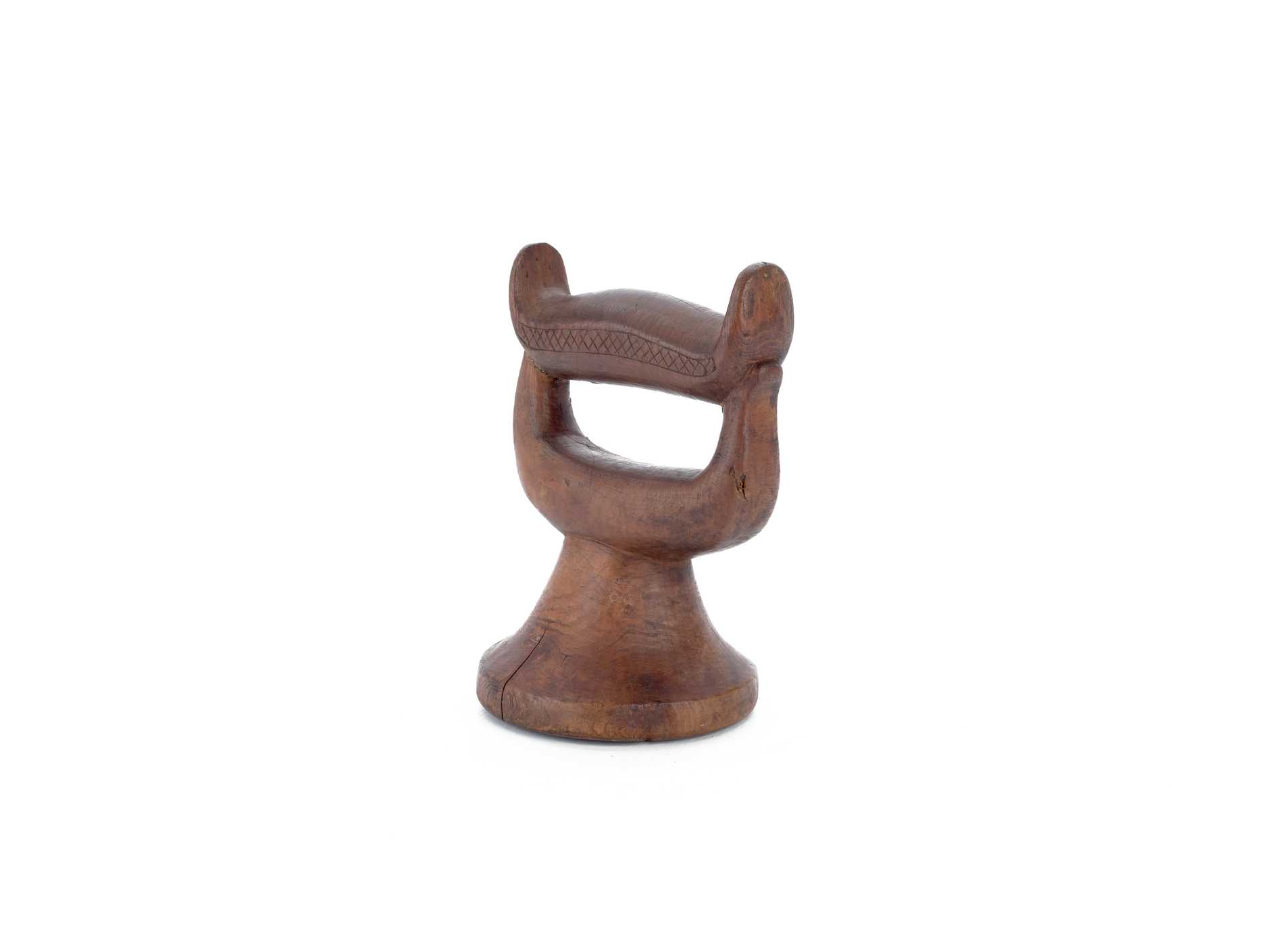 Tlingit women would have used this masher to press summer berries into a flat “cake.” Similar to today’s nutrition bars, the berry cakes were then dried and packed into boxes for winter use. Another long-lasting recipe crushed fresh berries with salmon eggs and salmon grease.

This masher is from Tlingit territory in southeast Alaska.

INDIGENOUS CULTURE AND THE CAPITAL CITY

Juneau, the state capital of Alaska, is a vibrant center of indigenous culture. Native people make up about 12 percent of the city’s population. The city traces its origins to the arrival of gold prospectors to Tlingit territory in the 1880s. 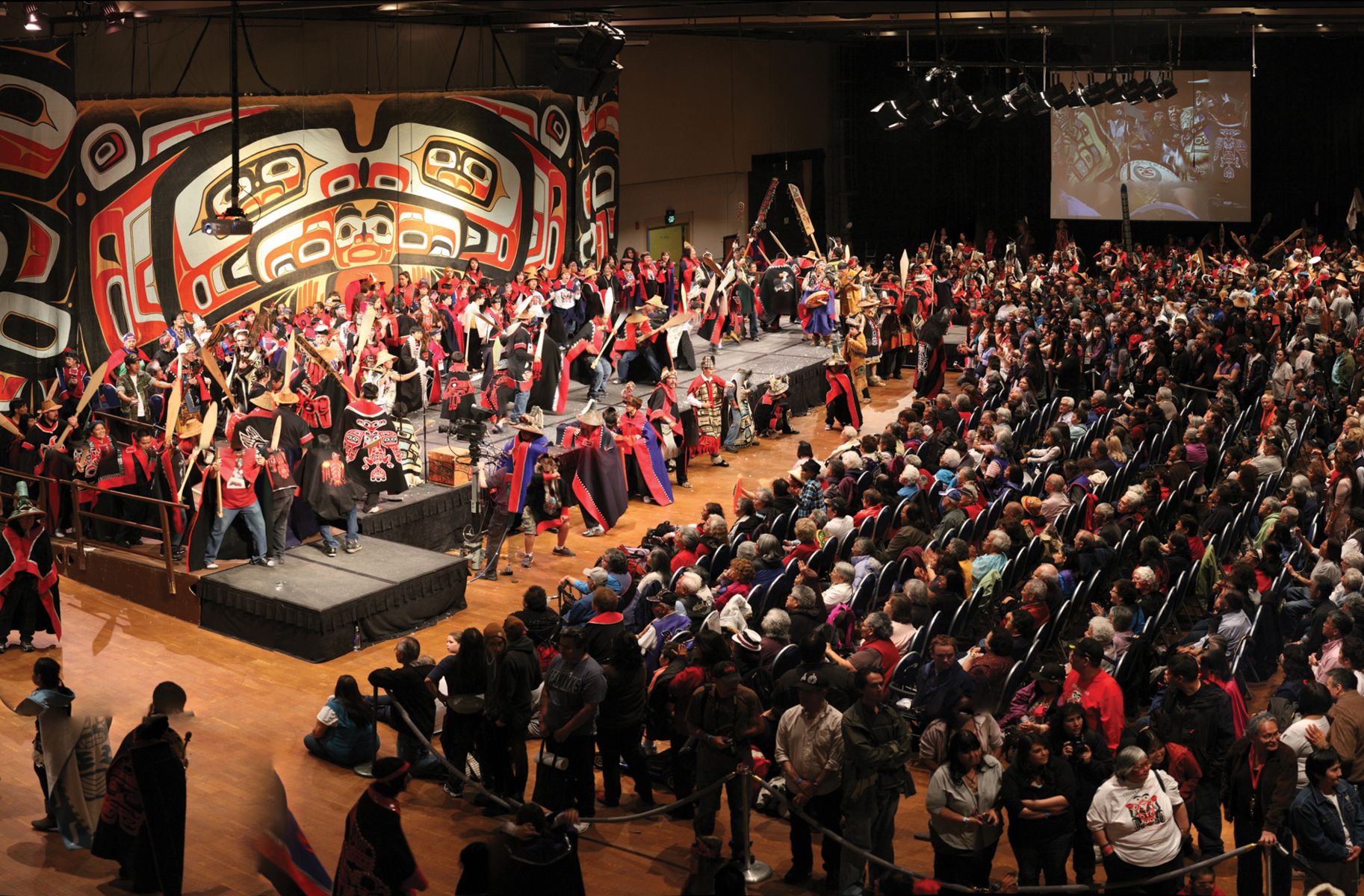 Every other year in June, about 5,000 people gather in Juneau for Celebration—one of the largest gatherings of Native people in Southeast Alaska. Started in 1982, Celebration is creating a new tradition for showcasing and preserving songs, dances, oratory and other customs. 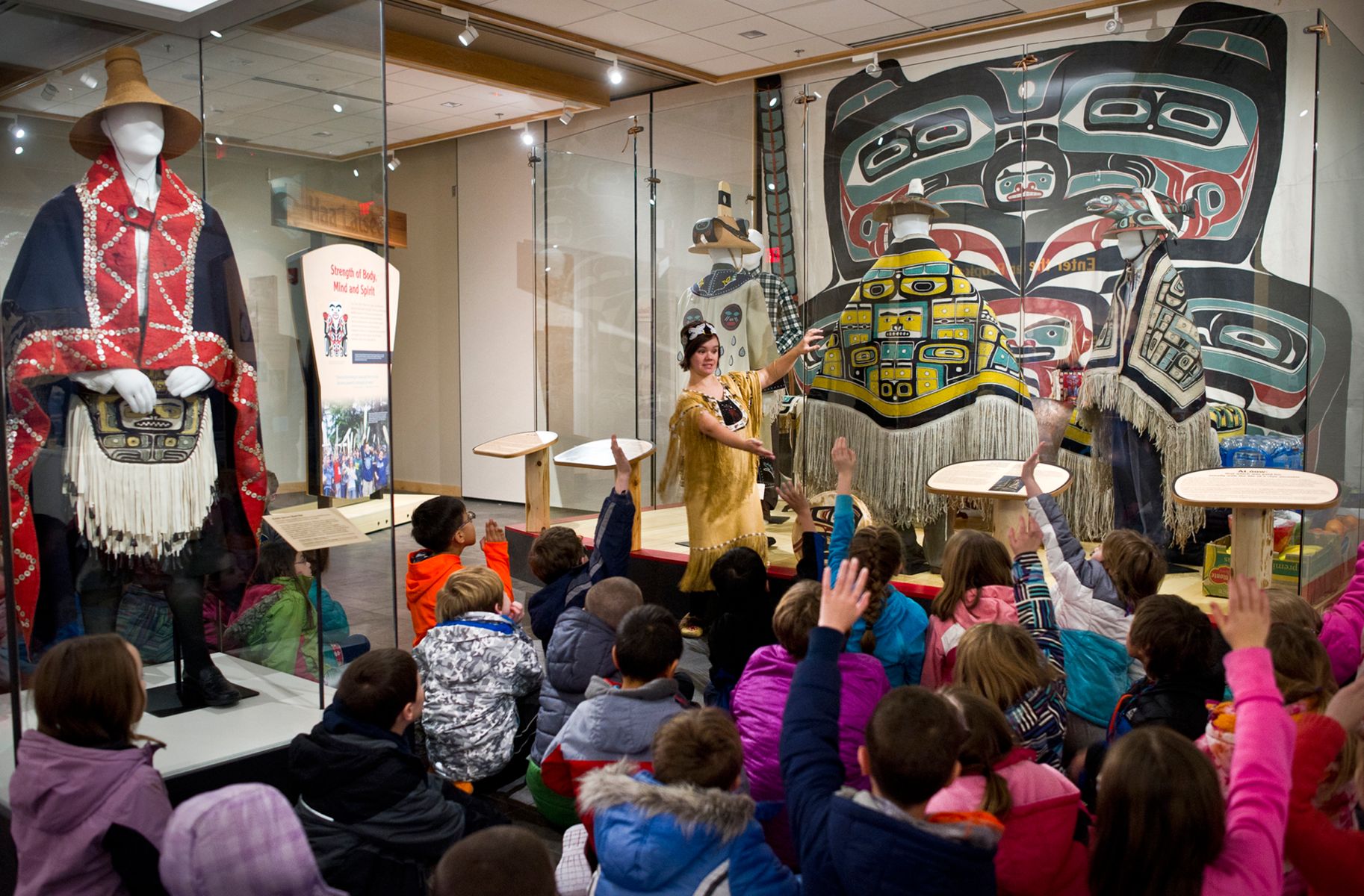 Lily Hope shows a ceremonial robe as she teaches second graders about Naxiin (Chilkat) weaving, a Tlingit tradition. Hope is a weaver who descends from the Tlingit Snail House in Hoonah, Alaska. High-ranking people wear these boldly designed robes over the shoulders on important occasions. The long fringe sways and twirls when a person wearing a Naxiin robe dances. 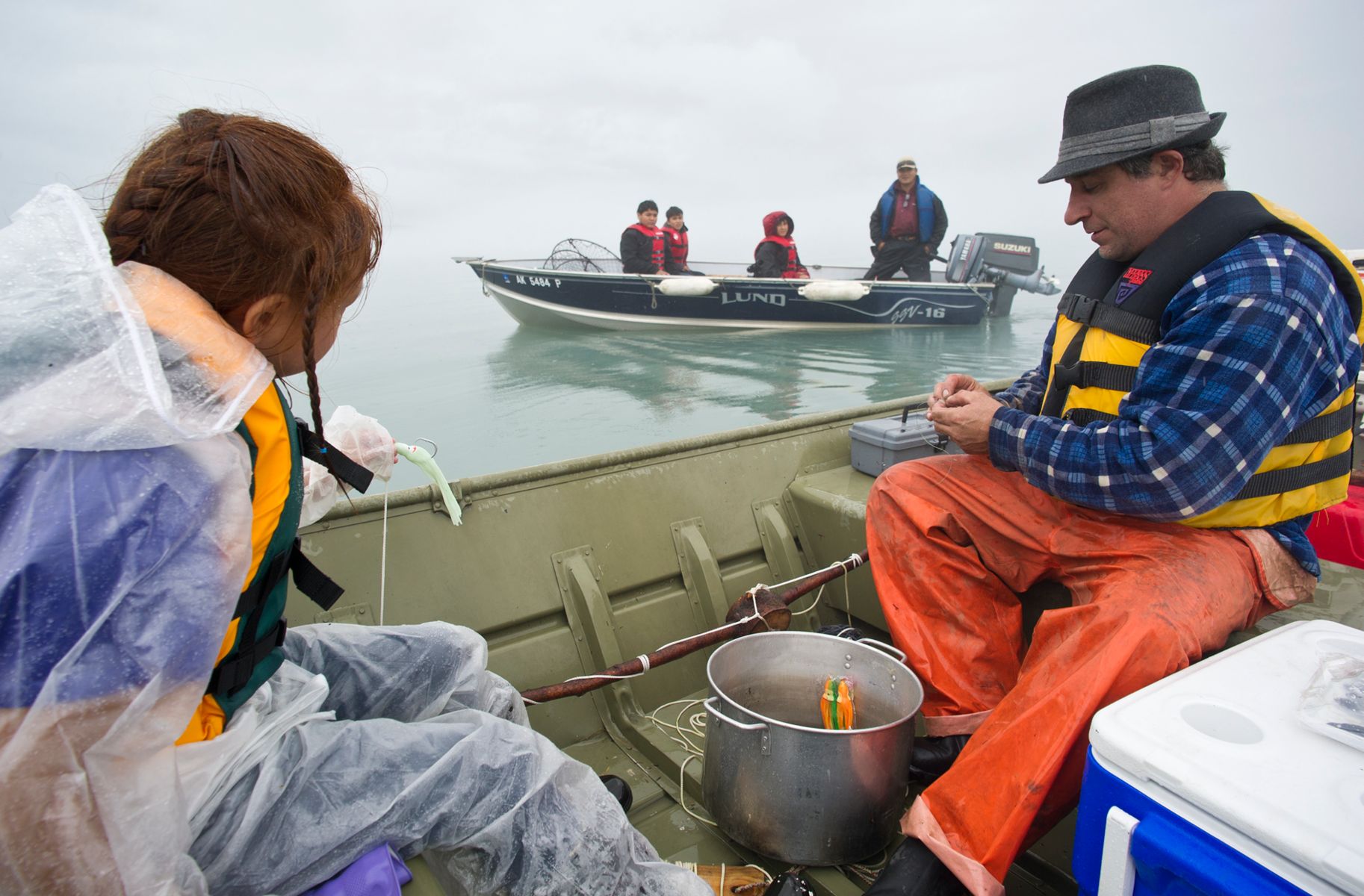 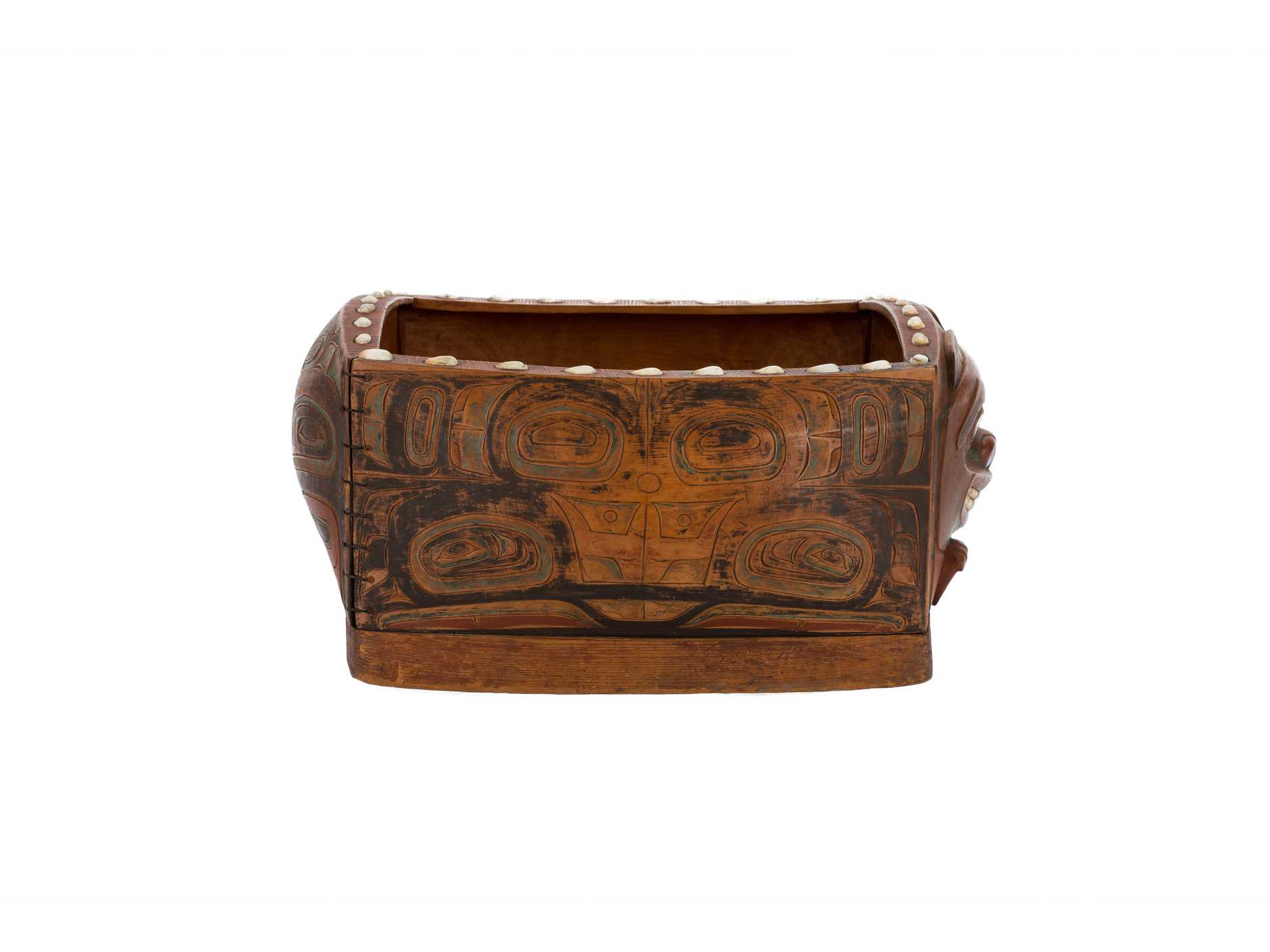 Bentwood boxes are a Northwest Coast specialty. To make one, an artist takes a single wood board, notches it, steams it and bends it into shape. This one is in the form of a grizzly bear, a revered animal in Tlingit culture that is considered an ancestor by some family lines. Touch the image of the box to rotate it and see the bear’s carved sides and hindquarters.

This food dish is from the Haines area in Tlingit territory in southeast Alaska. 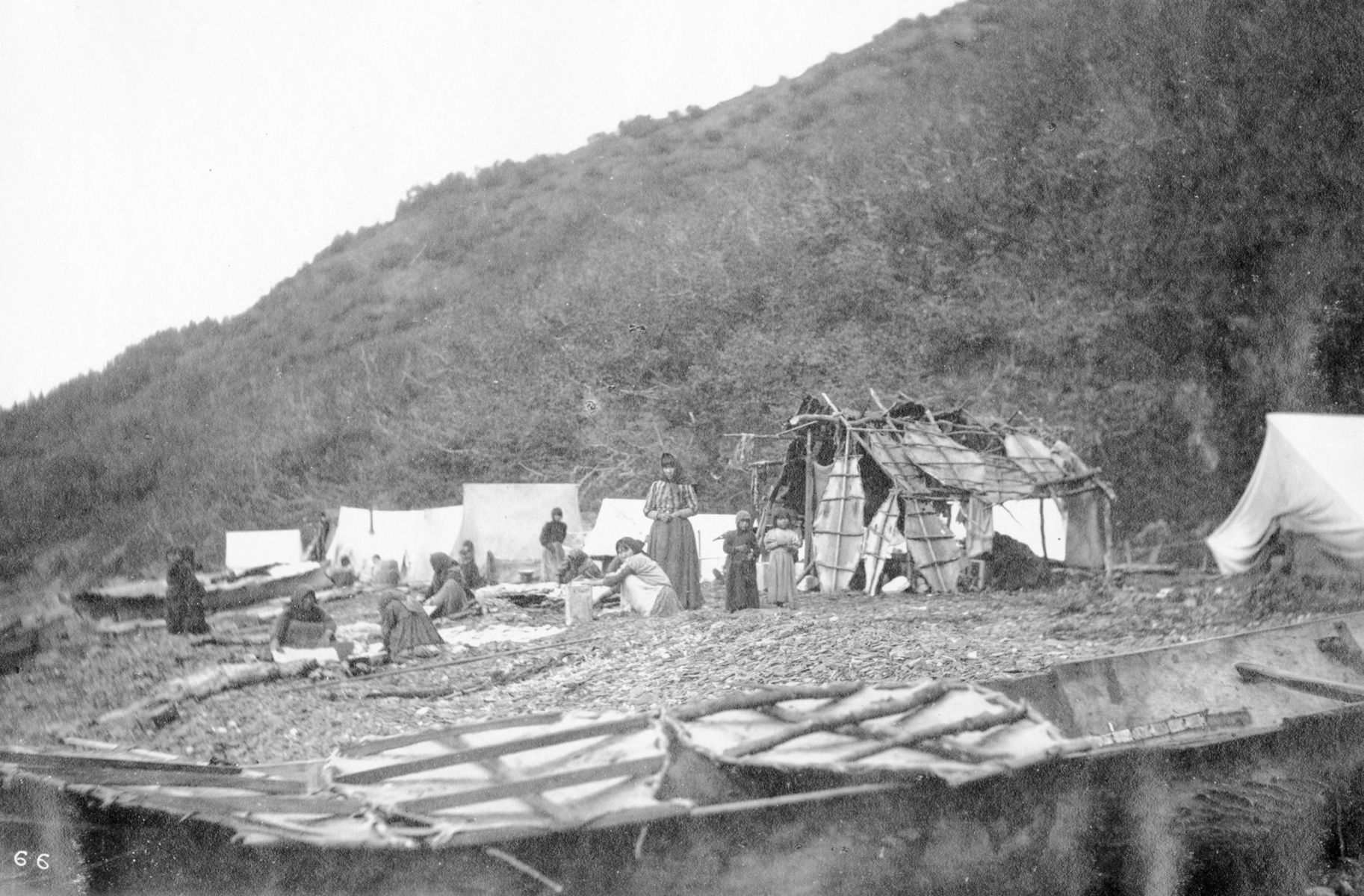 In the 1800s and early 1900s, every spring nearly all residents of the Tlingit village of Yakutat moved to the shores of Yakutat Bay. Men hunted harbor seals close to the edge of Hubbard Glacier. Women and children stayed in family camps like this one, where they butchered the seals and stretched the hides on wooden frames. Some Tlingit people today continue to hunt seals and eat their meat. 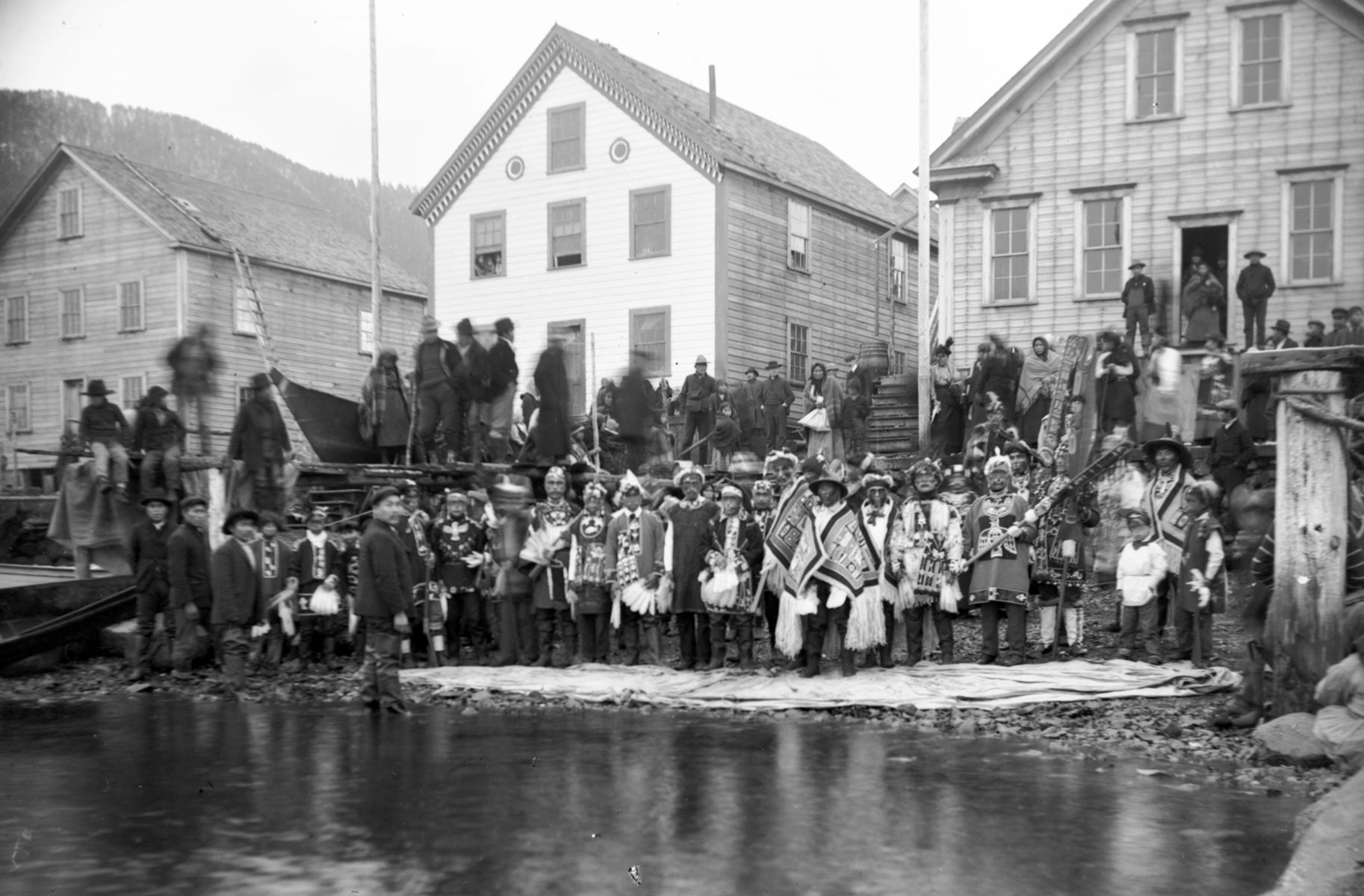 Members of the Tlingit Kaagwaantaan clan stand on the beach in 1904, dressed in regalia, to welcome guests who are arriving by canoe for a potlatch—ceremonial feasting and gift giving that will last for days. The gathering was an act of determination, as missionaries and some Tlingit people who had converted to Christianity were trying to persuade potlatchers to give up this traditional practice. It has continued to the present. 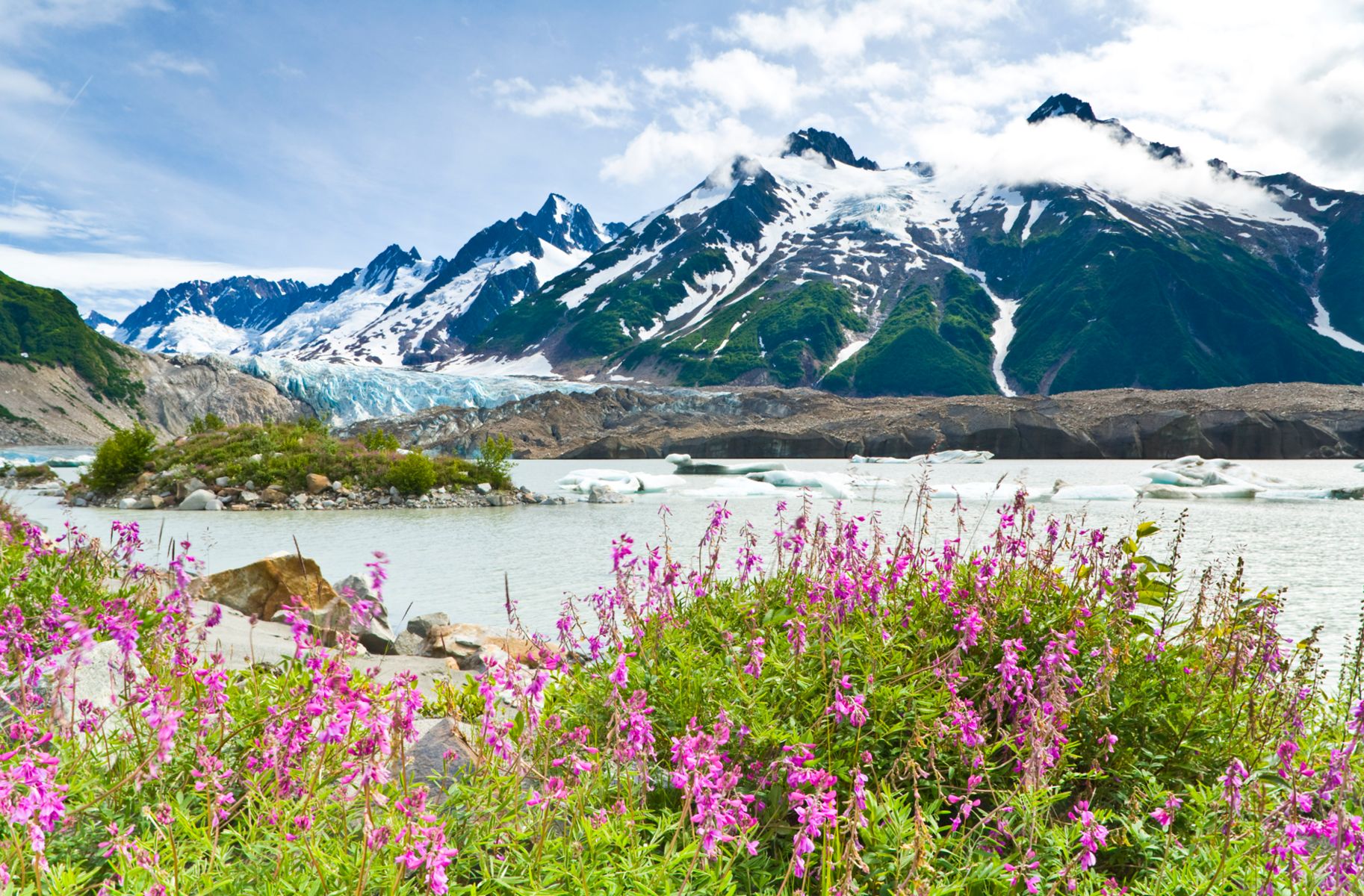 Glacier Bay National Park is a gem of Alaska’s tourist industry—and the ancestral home of several Tlingit groups. In the 1700s, the glaciers advanced, destroying villages and pushing some people off their homeland. Today the ice has retreated, and construction of a Tribal House in Bartlett Cove marks the return of the Huna Tlingit to their traditional territory. 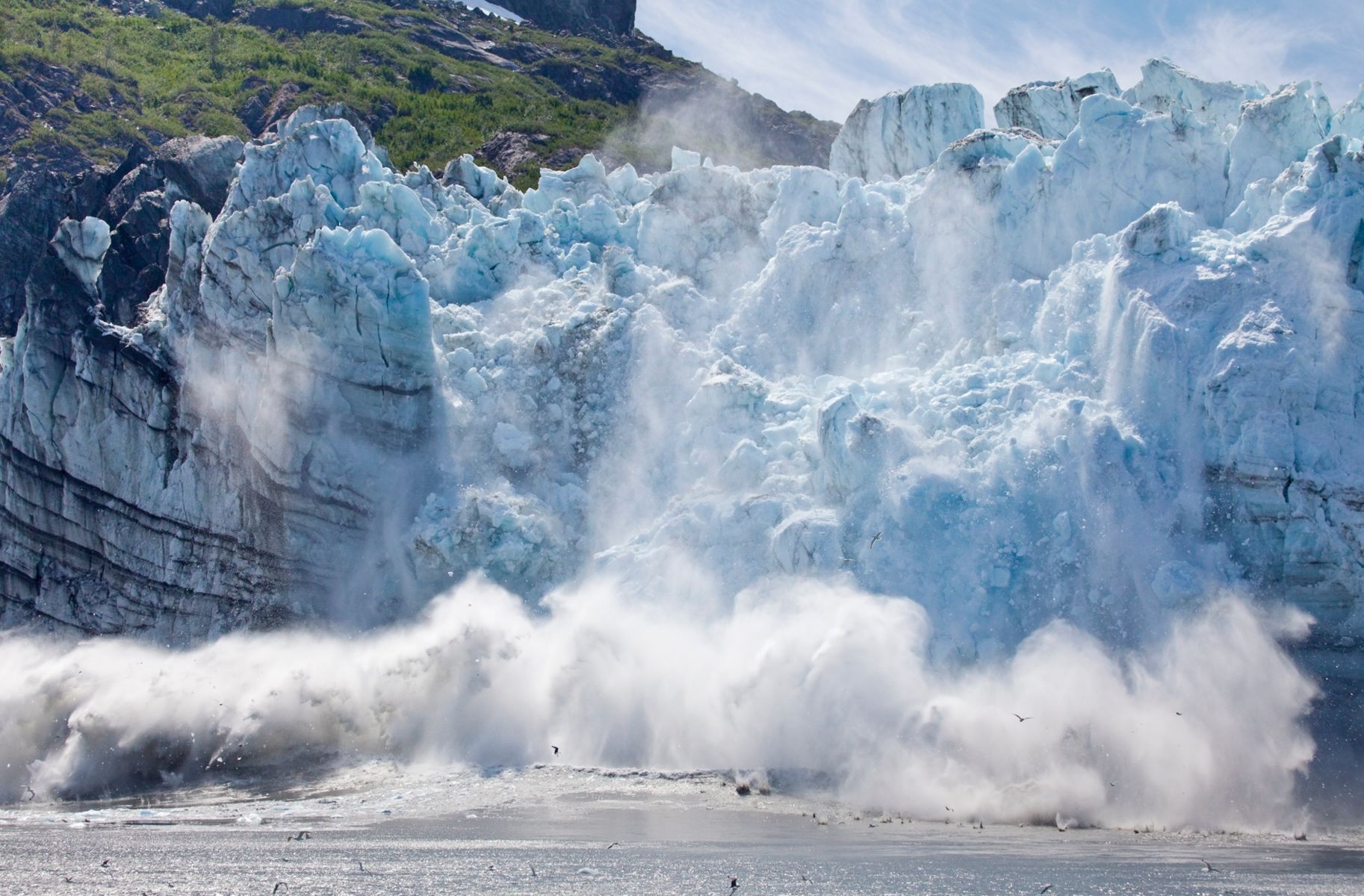 Ice crashes into the water with the calving of Margerie Glacier in Glacier Bay National Park. 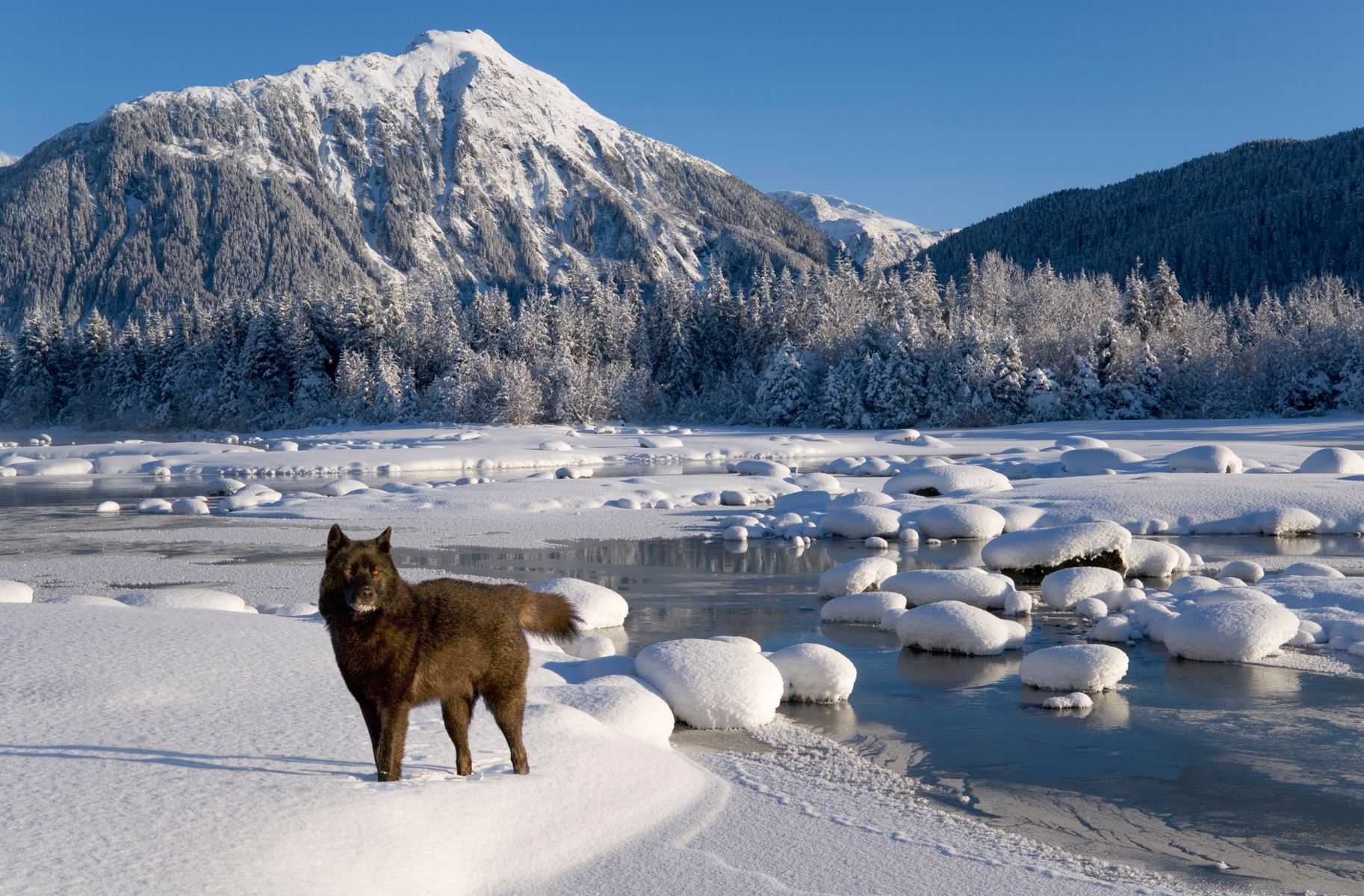 Dark-furred Alexander Archipelago wolves live on Prince of Wales Island and other remote islands in southeastern Alaska. Their future here is threatened by logging, which has reduced their old-growth forest habitat, and by hunters of the wolves’ favorite prey, Sitka black-tailed deer. The wolf is the clan crest, or family symbol, of some Tlingit families. 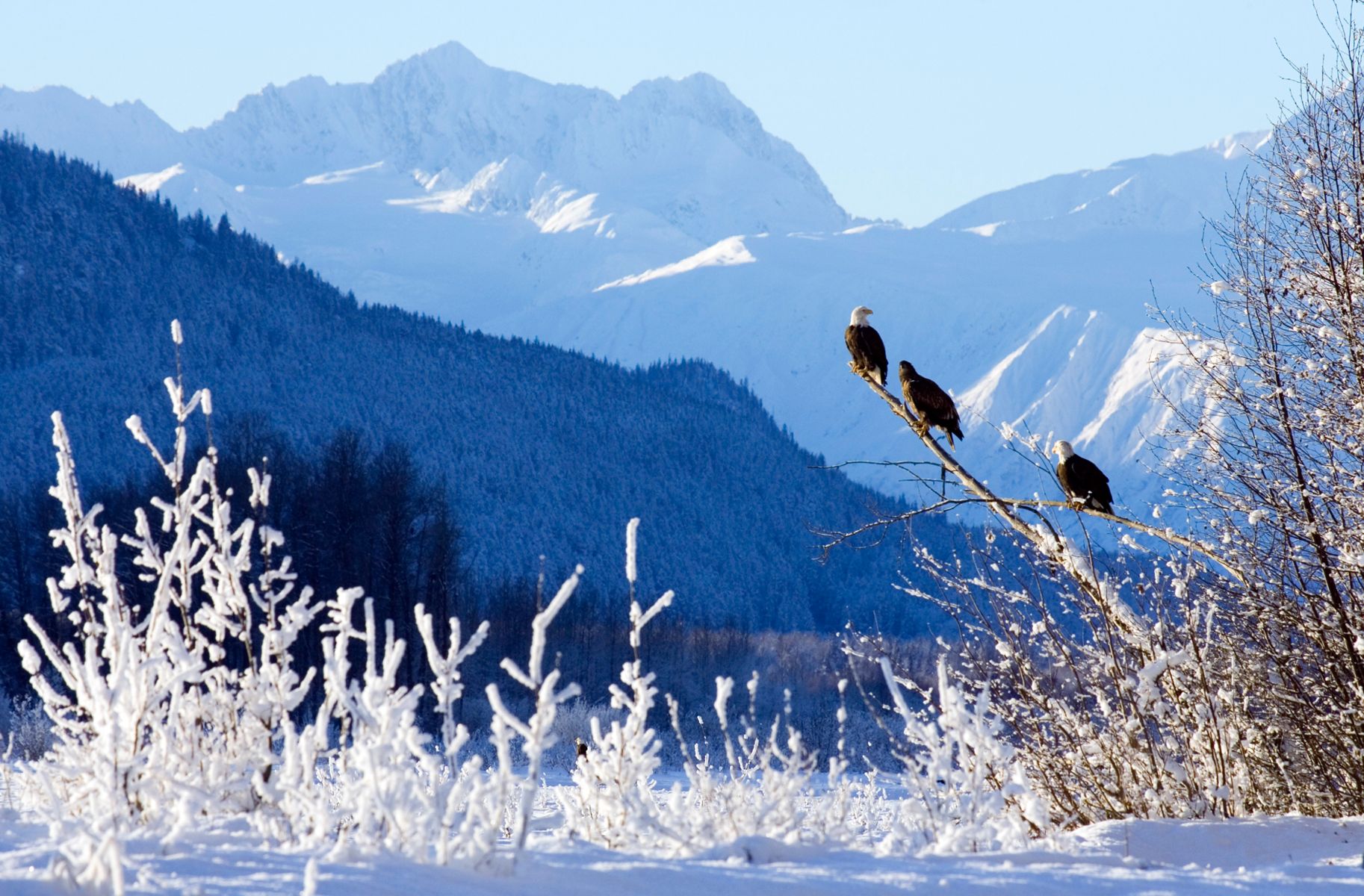 More than 3,000 bald eagles congregate here along the Chilkat River on traditional Tlingit lands every October through February—the largest eagle gathering in the world. About 300 of the birds call it home year round. The eagles feed on the carcasses of salmon that die after spawning. They also are attracted by water that remains open into the winter while other areas freeze. 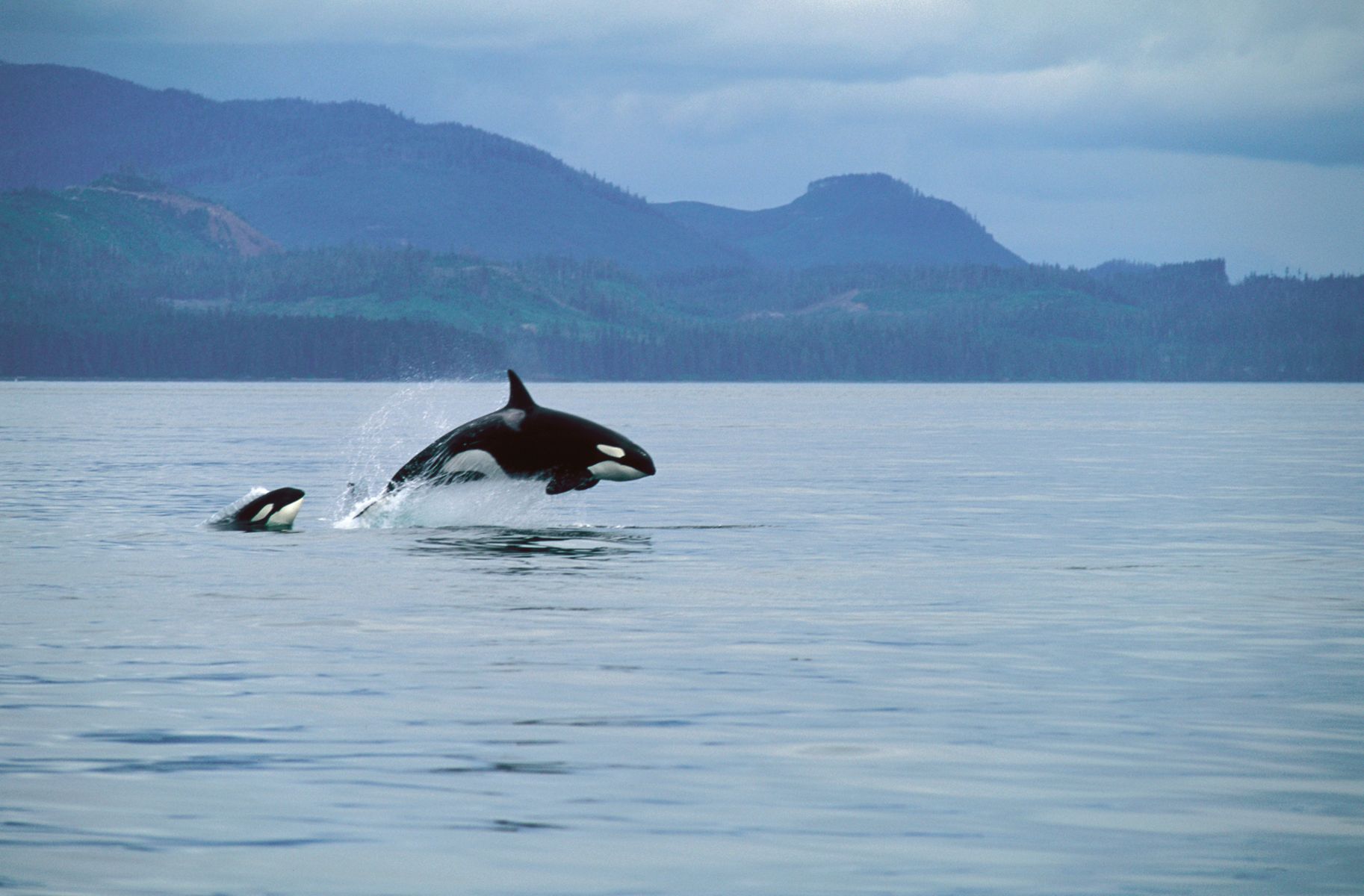 An orca mother and calf leap through the water. The orca, or killer whale, is called kéet in the Tlingit language. It is a crest of some families and figures prominently in the ancestry, art and stories of many Northwest Coast groups. 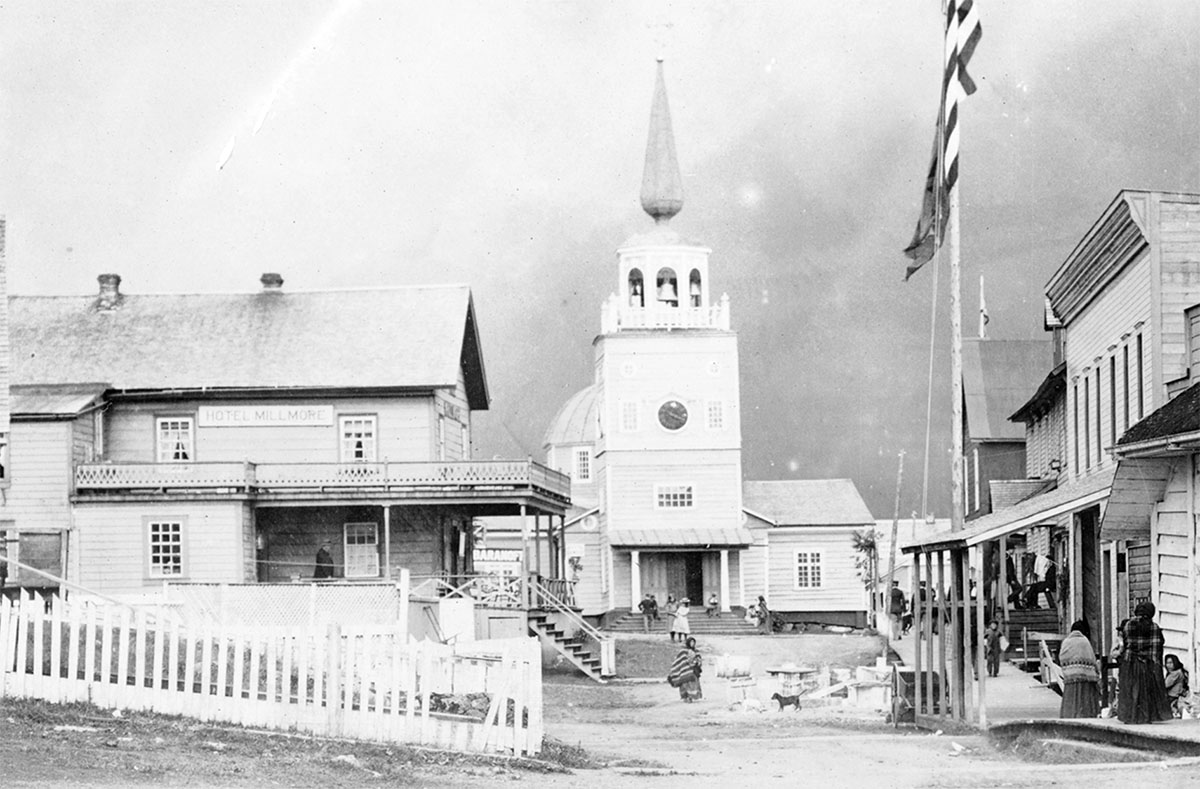 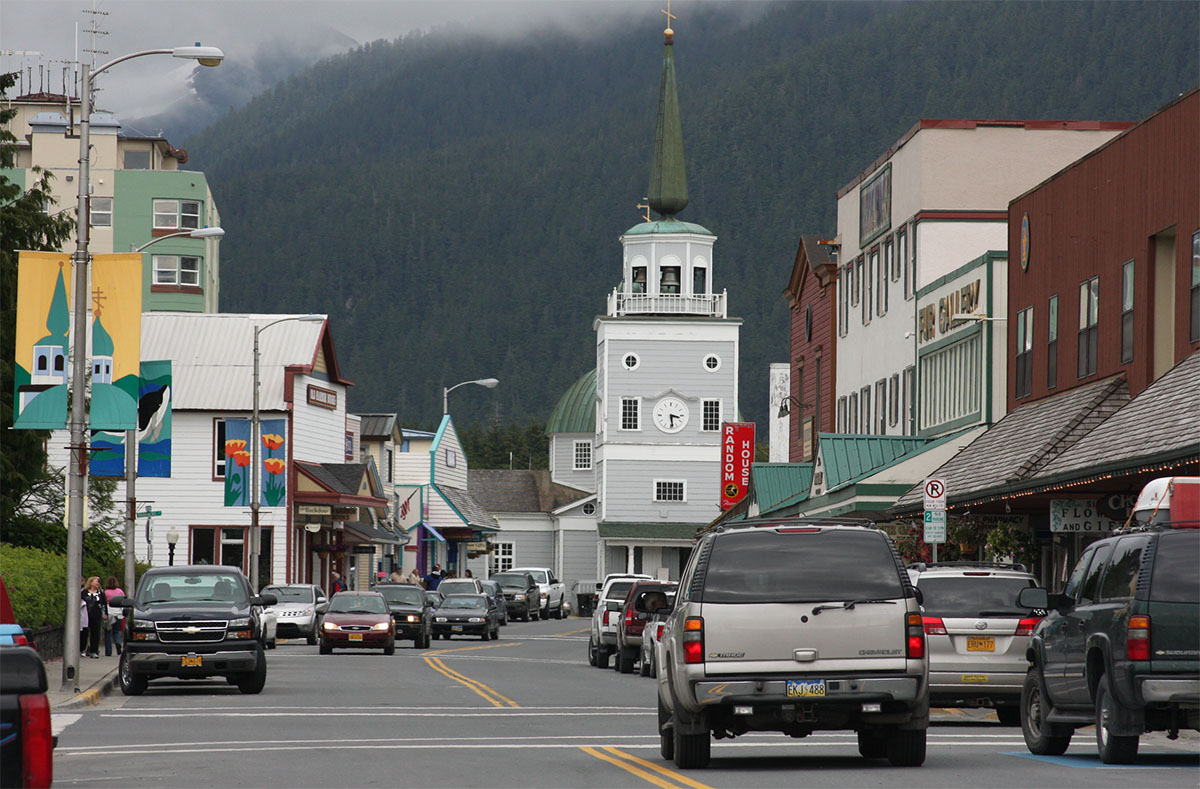 (left) Decades before Alaska became part of the United States, colonial traders from Russia settled in the Kiks.adi Tlingit village of Sheet'ká. The Tlingit resisted, but in 1804, the Russians bombarded them, forcing a retreat. This 1900 image of Sitka shows St. Michael's Cathedral, a Russian Orthodox church.
Slide to reveal an image of Sitka today.
(right) Fire destroyed the original St. Michael's Cathedral in 1966. The Orthodox church in Sitka's downtown today is a replica. Today Native people make up between 15 and 20 percent of the population of Sitka, including many descendants of its original residents.

FROM THE COLLECTIONS AND BEYOND

This exceptional robe belonged to a great Tlingit leader, LShaaduxisht (Shotridge), who wore it at ceremonies. Tlingit and Haida people call the style Naaxiin (pronounced nah-HEEN), but European traders named it “Chilkat” after Chartrich’s community in southeast Alaska, where women were renowned weavers.

This robe is from Tlingit territory in southeast Alaska. 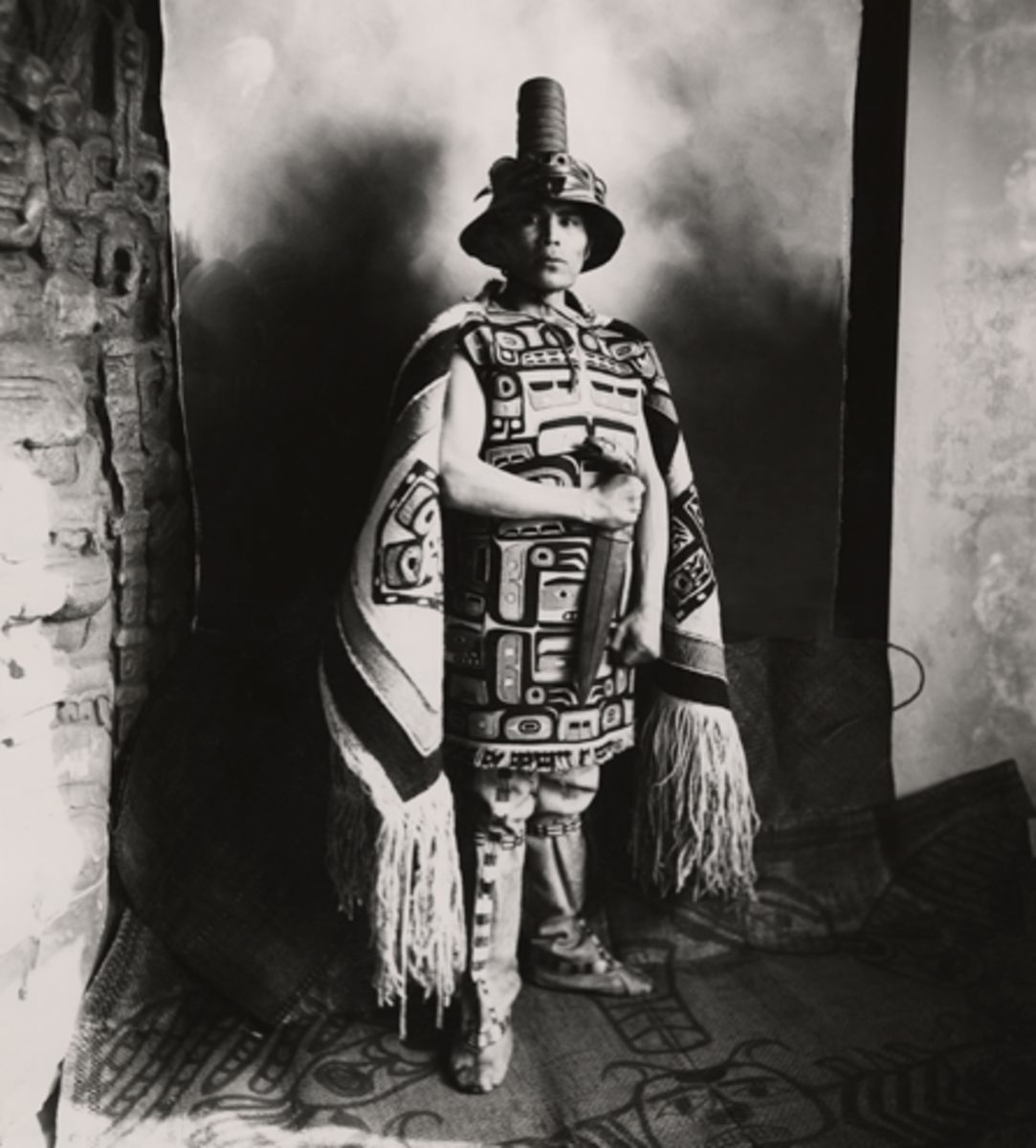 Louis Shotridge (Stuwukáa), the grandson of the leader who owned this robe, wears Naaxiin garments in 1912. He was a curator for the University of Pennsylvania Museum. 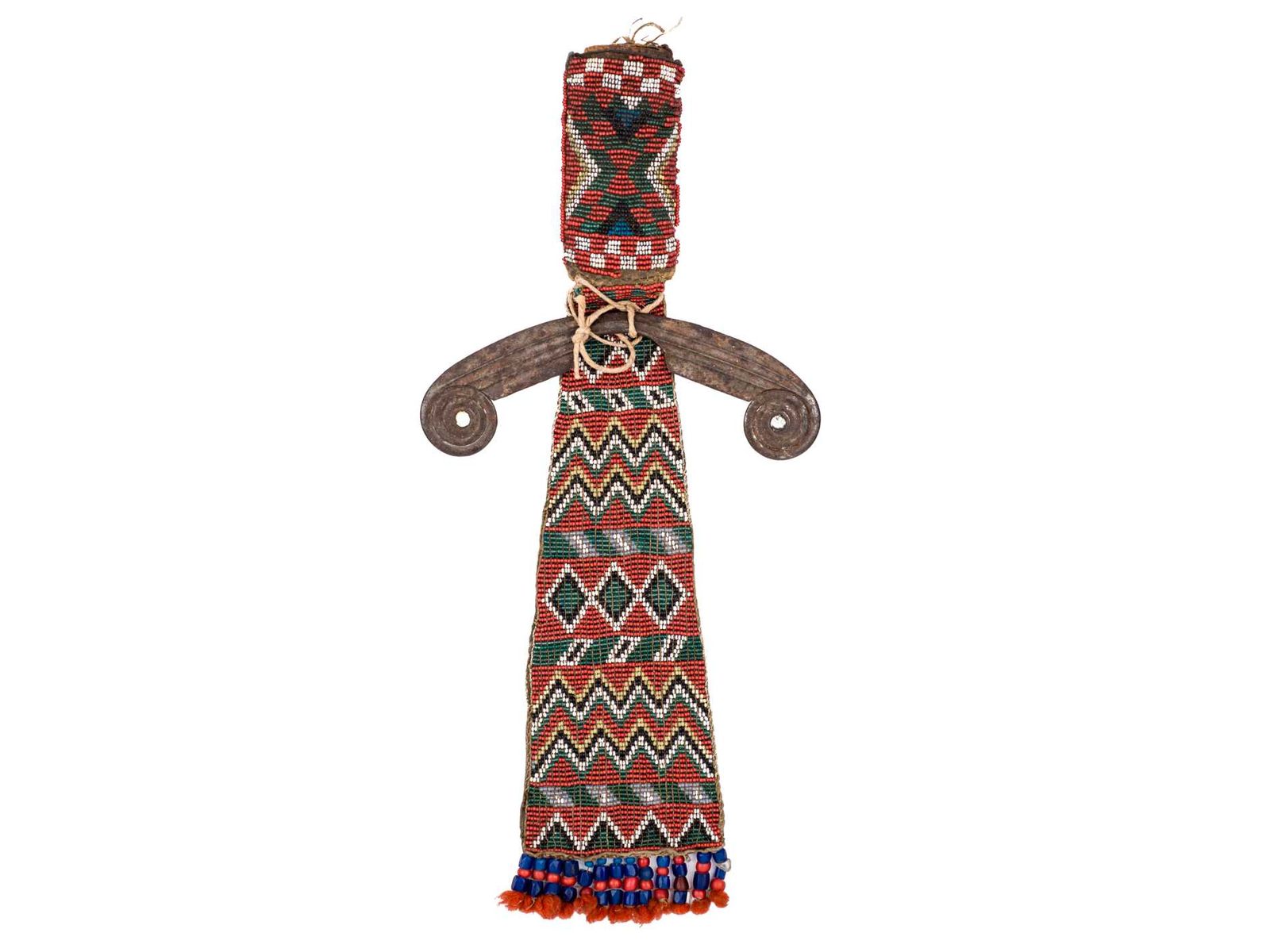 An elite Tlingit teenager would have worn this beaded ornament on her braid as a sign of her status and femininity. While locally made, its mix of materials and techniques from faraway places gave it value. The glass beads are European. The iron bar is a dagger handle from the interior of Alaska, as is this style of beading. The shiny abalone shell on the handle is from California.

This hair ornament is from the Juneau area in Tlingit territory in southeast Alaska. 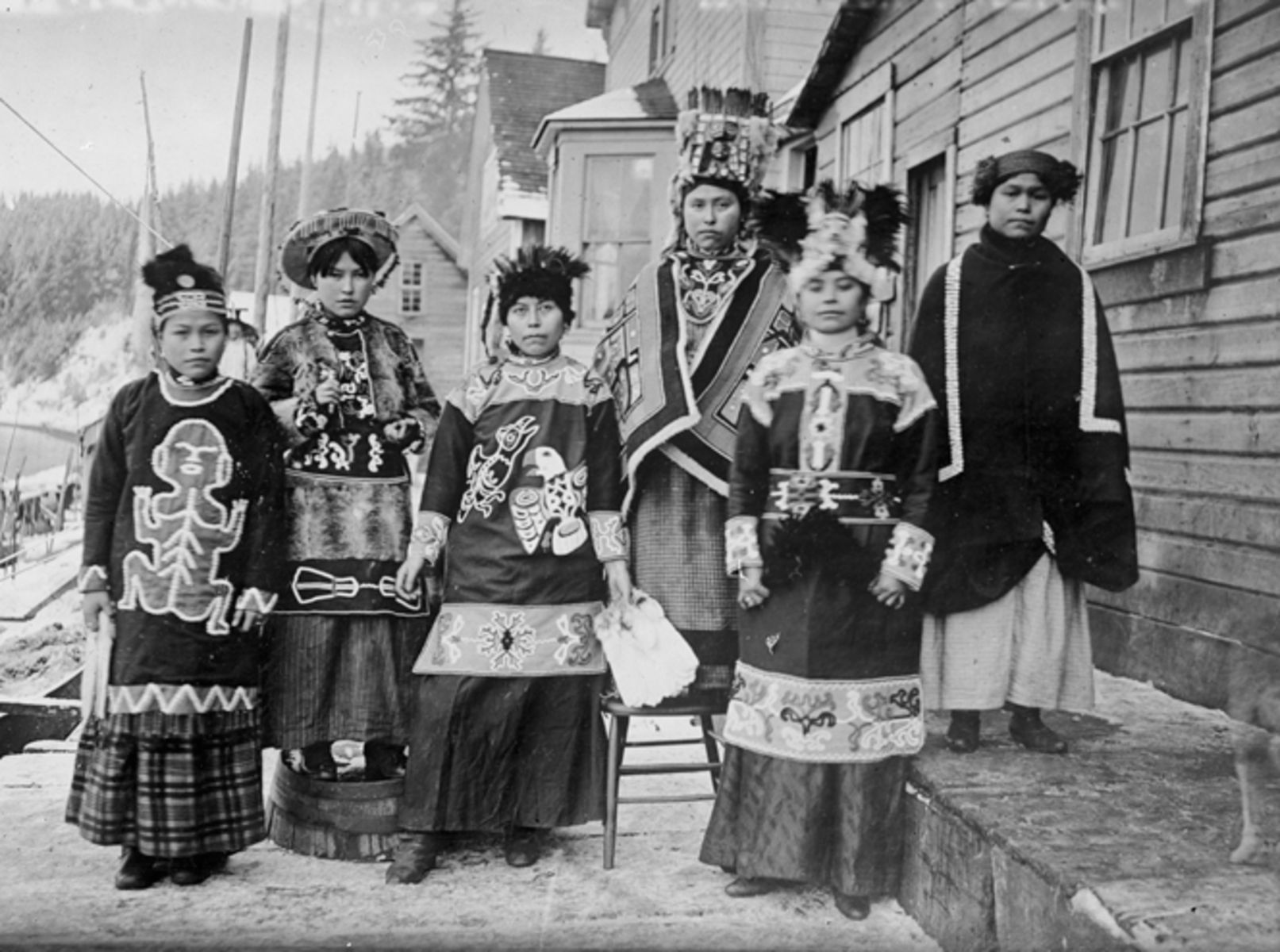 Tlingit girls from Hoonah, Alaska in 1909 pose in their elaborate ceremonial clothing, rich with beading.

Traditionally, spoons and ladles were the main utensils of Northwest Coast meals. This ladle is 17 inches long and elaborate, so it would have been reserved for the most honored guests at a potlatch, or community feast. It is made of the horn of a Dall sheep, carved with two bears and a raven and inlaid with gleaming abalone shell.

This ladle is from the Wrangell area in Tlingit territory in southeast Alaska.

A Tlingit person would have used this stamp to decorate his or her skin for a dance. The dancer would first smear animal fat and pigment on the stamp’s surface, then press the color onto the forehead or cheeks. The design is a crab. Black and red, traces of which can be seen here, are the two iconic colors of the Northwest Coast.

This face stamp is from the Sitka area in Tlingit territory in southeast Alaska. 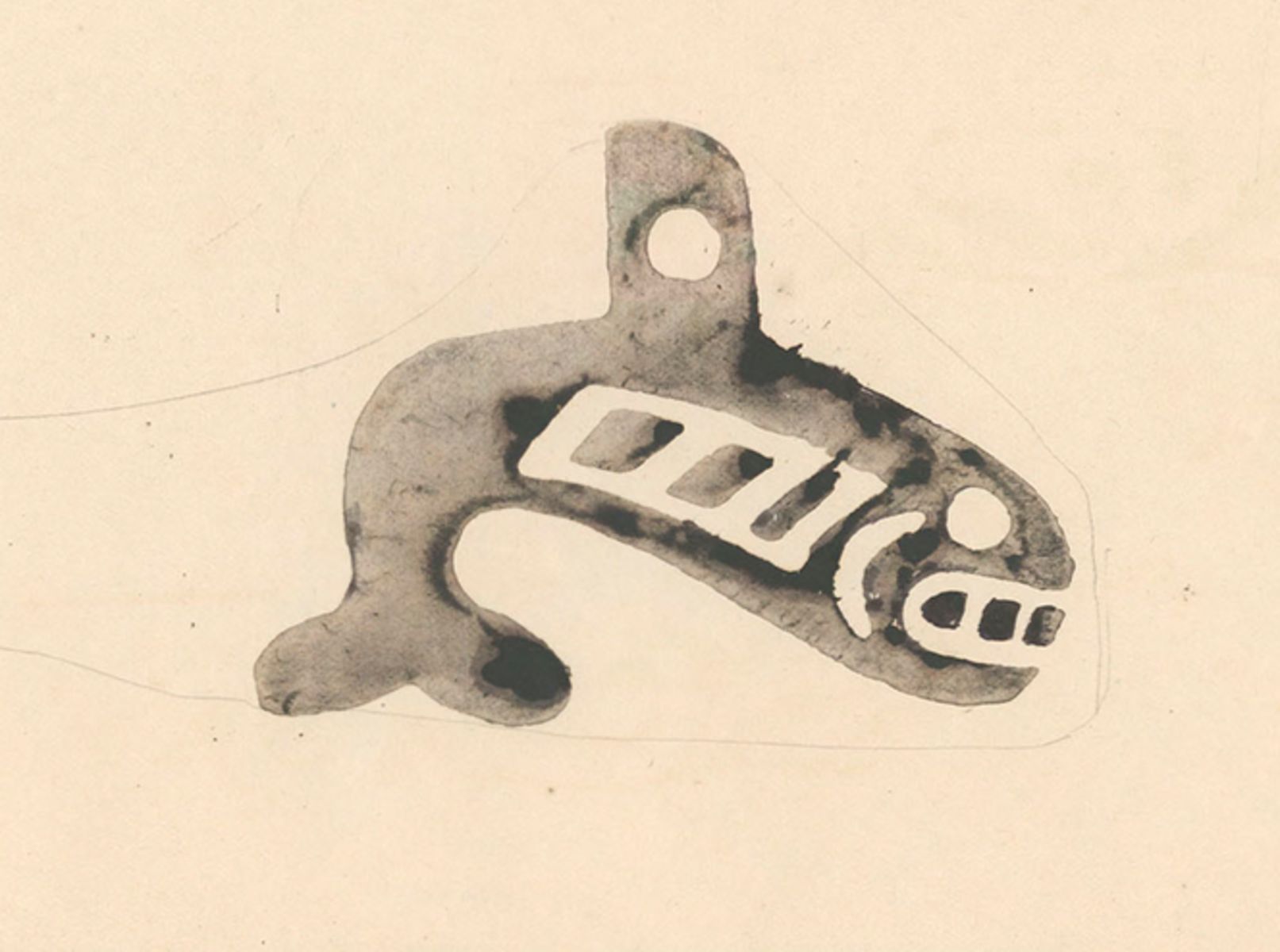 This is the impression from a different Tlingit stamp from 1902, a killer whale. 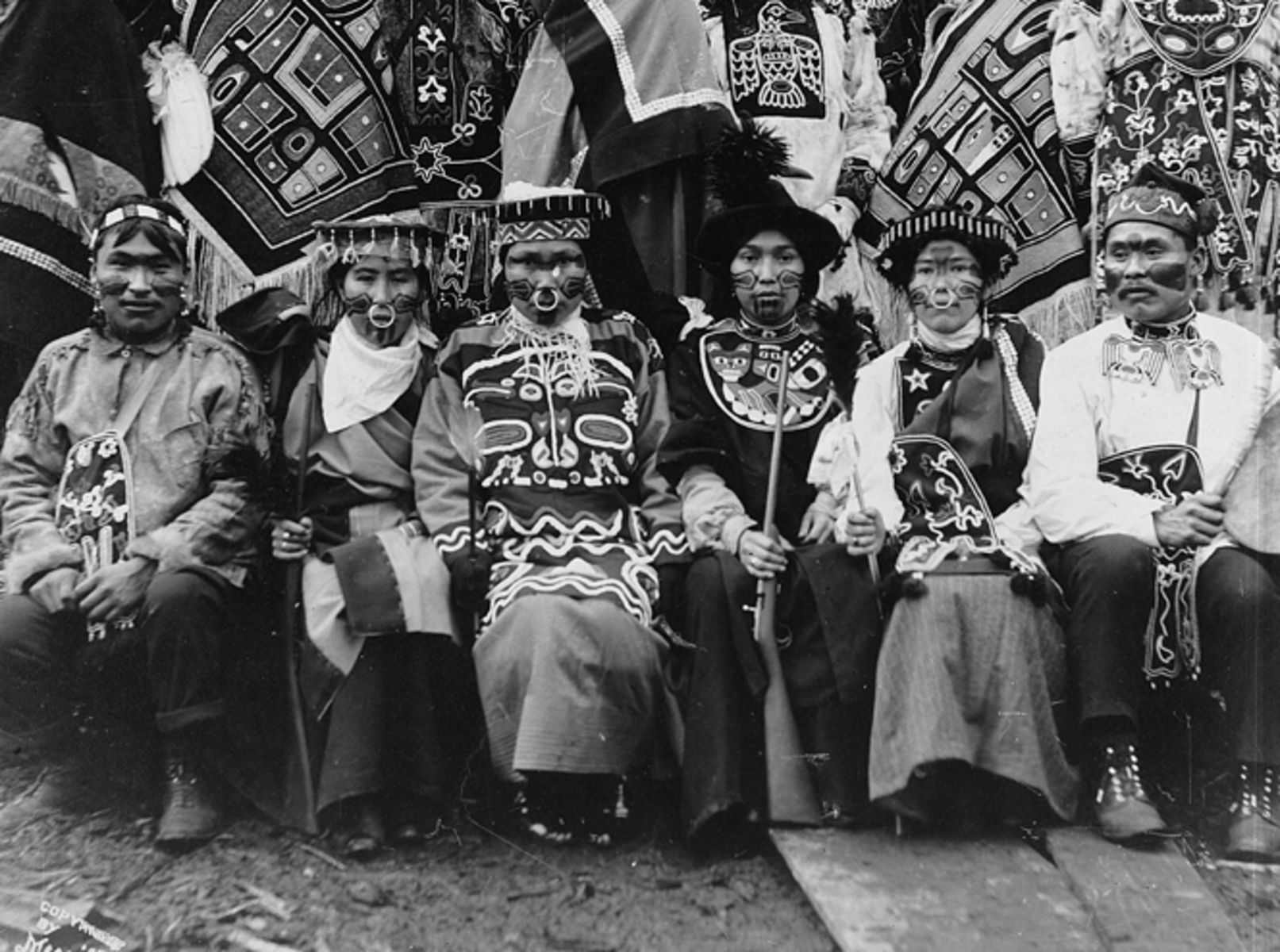 Hosts and guests at a Tlingit potlatch in Sitka, Alaska in 1904, many with stamped designs on their cheeks. 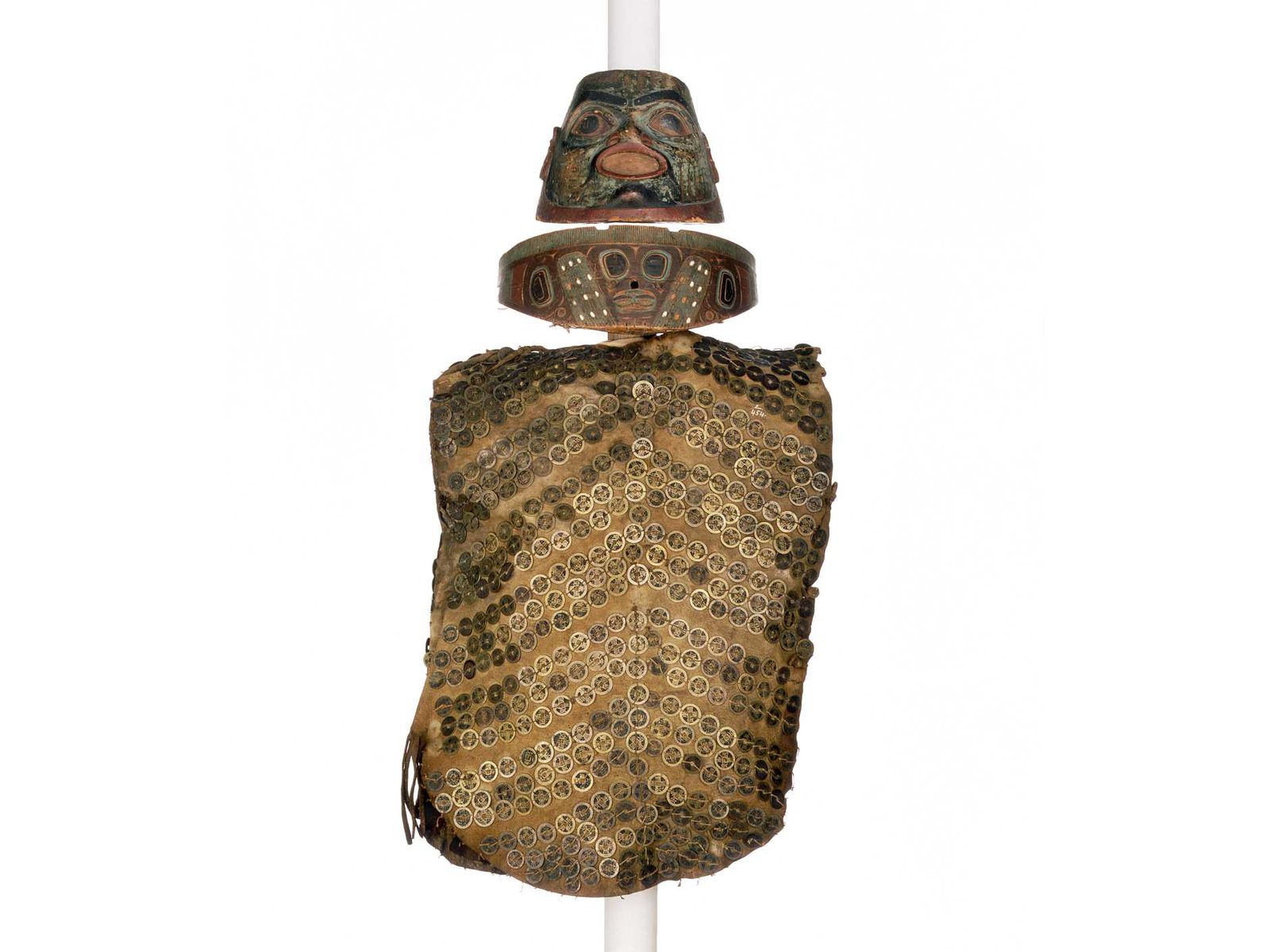 The wooden helmet and collar here were a typical style for Tlingit raiders warring with other Native groups during the 1800s. But tunics worn in battle were usually armored with slats of wood. This tunic’s Chinese coins, most from the late 1600s, reflect the extensive trade networks of the Tlingit people. The loose pattern of the coins suggests this tunic was not protective in battle and rather was worn in ceremonies.

This armor is from Tlingit territory in southeast Alaska. The pieces came from different places, so they were never worn together as displayed here. 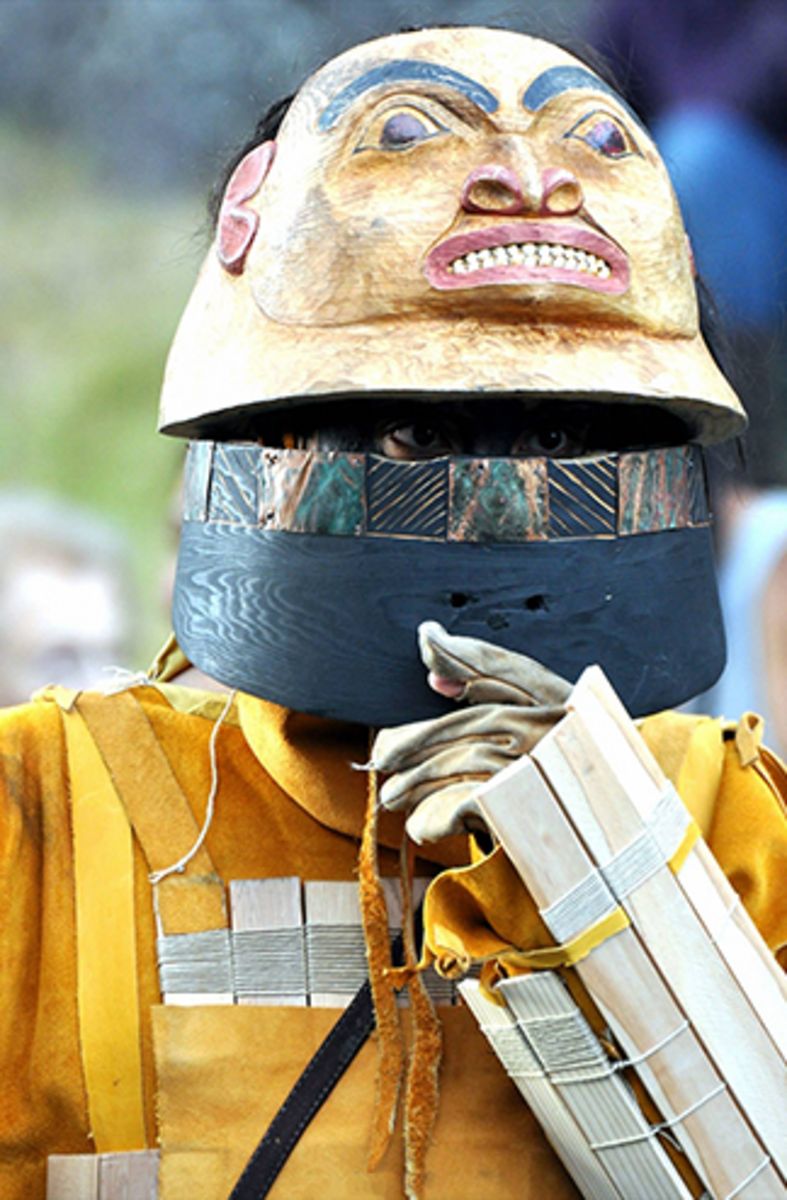 A shaman hung this charm with others on a necklace, which jangled to attract the supernaturals during healing rites. It is made of a sperm whale tooth. Rotate the charm to see its dreamlike group of spirit helpers—a shaman with a feathered headdress, a sheep’s horn, a raven swallowing a spirit and an octopus with a human face.

This charm is from the Haines area in Tlingit territory in southeast Alaska. 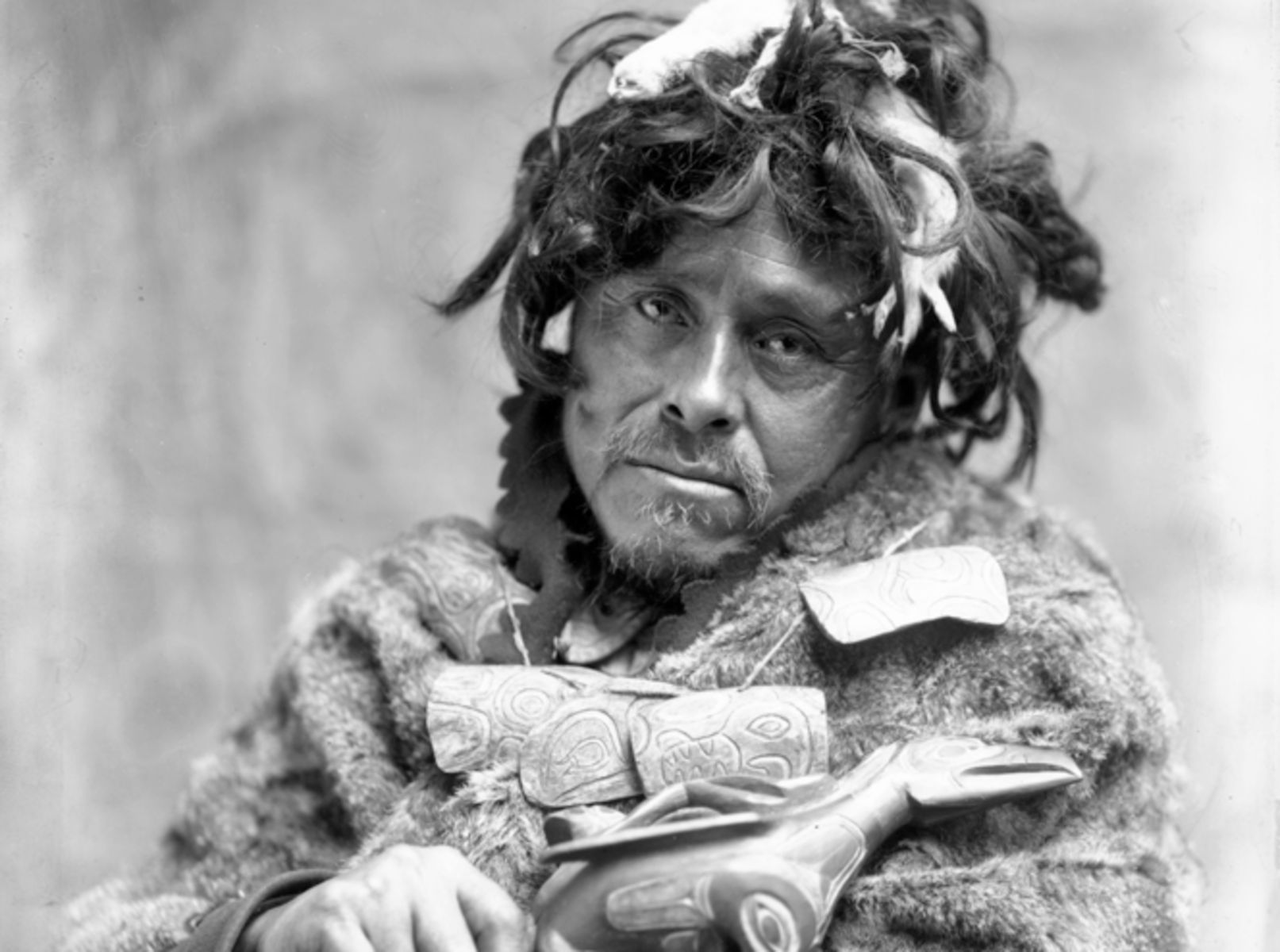 Tlingit shaman Koot-Keek poses with the devices of his profession—a bone charm necklace and an oyster catcher (bird) rattle—circa 1900.

See more from the Museum's collection of Tlingit objects.